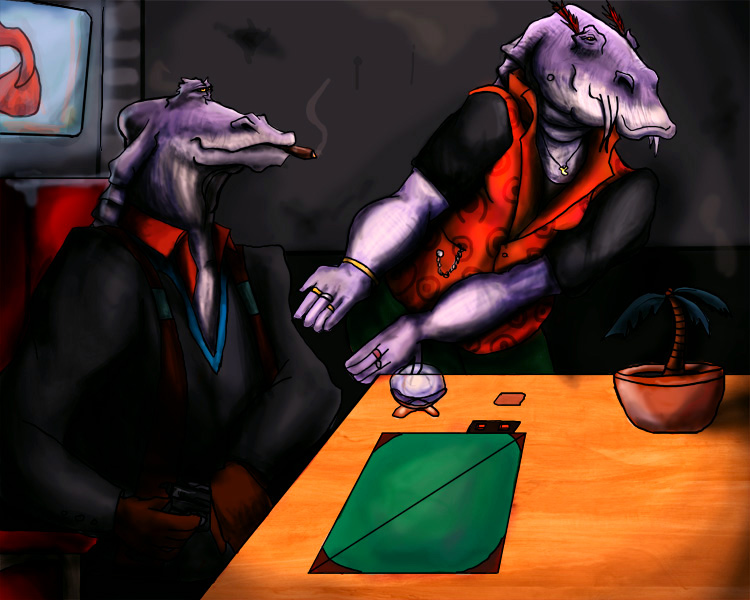 Request by JourneyMan of Zion:

Originally from their homeworld of Naboo, the older of the two brothers, Lenpil, set off into the wider galaxy and found himself under the employ of the Hutts of the Vosadii kadijic, learning the ins-and-outs of business in the underworld until he broke free and went into business for himself in the early 110s ABY, setting himself up on Primus Station over Toydaria in his own personal restaurant called the Ankagura Cantina. With the knowledge he learned from his former bosses, he put his hands into many different pots, involving himself in business ventures both legal and illegal and becoming one of the most powerful Non-Hutt crimelords in Hutt space.

After establishing himself, Lenpil helped out his younger brother, Lap-Nap, back on Naboo and set him up in a business of his own, a smuggling enterprise. While not as successful as his brother, Lap-Nap has been able to build up his ventures quite a bit. His newfound success, however, went to the younger Gungan’s head as his lifestyle became more exorbitant and his tastes much richer until he started to become something like the Hutts Lenpil once worked for.

He is often seen with a Cigarra hanging out his mouth and has a keen look in his eyes, always thinking and always planning. He is seen sitting behind his greel wood desk in a plush leather chair with his hands clasped together on the desk. His desk is usually orderly but has quite a few datapads and flimsiplast sheets plus a carved stone ash tray from Naboo for his Cigarras on the desk protector.

Lap-Nap, unlike his brother, has not taken care of himself and is a rather corpulent individual, unlike most Otolla Gungans. He has many gold earings going down his ears and dressed very ornately and gaudily.

That poor fish in the microwave...