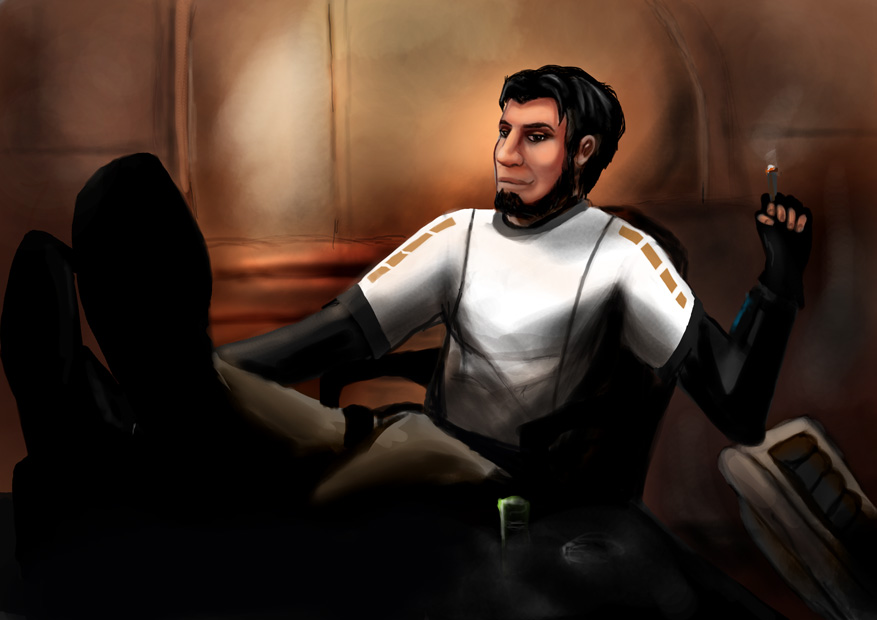 Request by Jaster Ghent
I also found his version as a nice suprise on Deviant Art. Have a look! -> Click Here!

Darius grew up on Corellia, or more like the plains of Corellia. His father owned a transportation service, that was mostly groundbound, but even though, Darius was looking up to the stars. Early on he nicked his father to expand to take the business into space, but the father didn't think that was a good Idea. Darius was still determined to fly through the sea of stars. When he heard of the Imperial Flight Academy he set his course to get there. He hired with some interplanetary Transportation Services at his young age to afford to get in there and to expand his abilities. Darius was after some time taken into the Academy and he loved it, at least from the perspective of learning more about flying, not following commands. He went through the Academy with brilliant scores, but a shaky image as a troublemaker. He joined a squad in the military only for a short time, as he was striped of his free will and he saw himself in the wrong place, not working well with strict discipline.
Darius left on good terms and went back to Corellia, to try and get his father to start a space transportation service. His father fell ill, shortly before Darius came back and was forced to sell the business to uphold the living standard. Darius was now an excellent Pilot, but with nowhere to go to. He hired on with a Mercenaries group and they showed him all manners of fighting, especially with blaster pistols. Just shortly before he went to Tatooine he found an arms dealer that was desperate to sell a rarity on the market, as it was just too unique for his customers. But Darius saw potential in the weapon, a Blaster-Revolver, a weapon packed with power to the brim. He immediately took it and all the ammunition he could get for it. Darius didn't know where it was from, except for the corporations writing and an address where to get the ammunition.
He went to Tatooine as he heard a corporation needed pilots for their new settlement on the planet and so he hired on with them. They took Darius in and made him the Captain of a new Trading operation. Now he is with his new crew on a run for fortune in the name of CST Ltd.

Whoa. That is fantastic work Drig. Really mixing up the dark and light contrast, a fluid semi-relaxed pose, a fitting facial expression, and a very realistic looking 'death stick'.

Hey! This is some awesome work, man!! Love it!

Oh that is cool! You've created an awesome atmosphere there, I can almost smell it!

Nicely illustrated Drig! Looks very classic SW to me, kinda reminds me of the old 80's Droids cartoon, just updated an brought to the present.