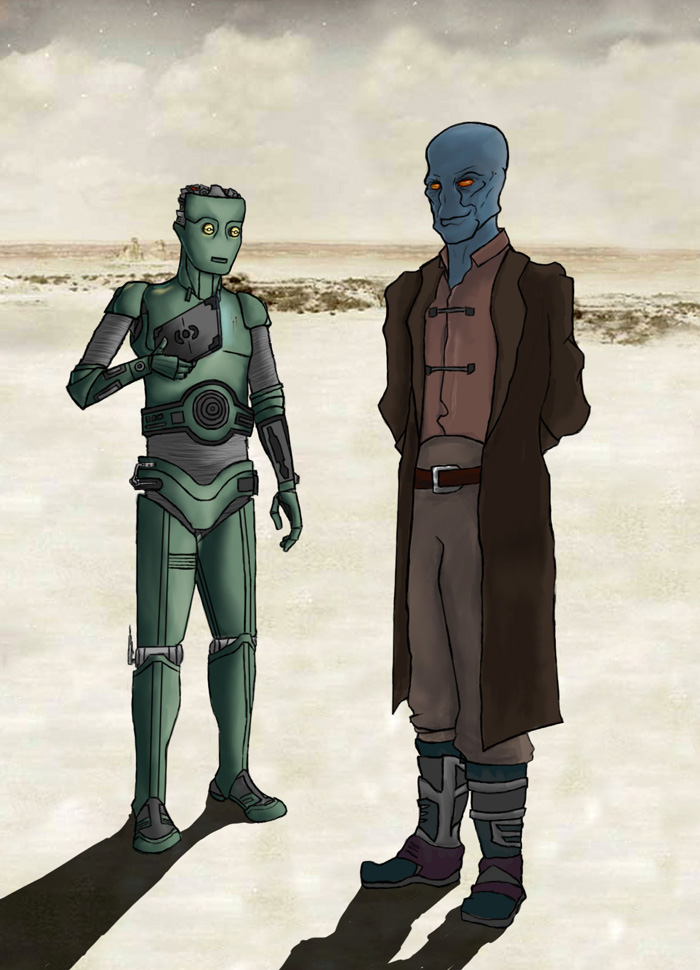 Captain Jav Boran, a calm, cool customer, maintaining his relaxed, under-control demeanor in even the most dire situation. This, however, is not necessarily the case as he is merely able to maintain the illusion of control even if he is silently cursing in his mind. He is a fan of a variety of music and has taken to casual drinking since he’s ‘left’ the order, even keeping a small liquor cabinet in his quarters to share a drink with the crew or visitors of the Fool's Gamble.

Joining Jav on the Fool’s Gamble is his loyal co-pilot and partner, S2-56G. The S2-series Multi-purpose Utility Droid was an attempt by Industrial Automaton in 120 ABY to create a 'Jack-of-all-trades' droid to help cargo pilots and star jockeys in day-to-day operations on board their craft, filling the roles of Astromech, Repair, Manifest and Protocol droids to satisfactory effect. While it could not best those droids who specialize in these area as their primary functions, its success rate for its assigned tasked has made it an attractive offer to pilots or corporations who do not wish to shell out the funds for multiple droids.

They have a generally pleasant, friendly personality, yet not overly talkative, making good traveling companions for pilots on long trips. As well, they are also programmed to grow and adapt over time as they interact with those around them and have even shown the ability to learn when it is necessary to bend the letter of the law when it comes to dealing with port and customs officials, including the ability to bribe those they need to when the need arises.

All of these things are present in S2-56G. He is often the only one the man will openly confide in and actually considers it to be one of his closest confidants. S2-56G gets damaged on Mustafar and Captain Jav replaces his damaged cranial chassis with that of a DD-series Manifest Droid as shown here.

As I've said before, EXCELLENT work, Drig, and the background is really quite fitting since Jav, S2 and the crew are currently stuck on Tatooine for the time being. ;-)

One of your best works yet! Great expression on the Duros Captain.

WOW! this is really great. I *do* have a question or two - Really, these are for Journeyman, not Drig...

A) do you have D6 stats for the droid?

B)What is "ABY"? I know it's a dating system, but otherwise, never heard of it.

V-Man
"All I need is more ammo, a little water, and some chips if you got them."

ABY = After the Battle of Yavin. It's a commonly used reference to place an event in relation to the very first Star Wars movie. For example:

Just to make a note, there was a crossed wire in communication and the head didn't quite come out as imagined, but liking the design I've retconned this picture to be from sometime down the road in our campaign. S2-56G gets damaged on Mustafar and the Captain replaces his damaged cranial chassis with that of a DD-series Manifest Droid (another Legacy-era droid of mine I want to get art of). The actual head of the S2 is much more ovaloid and somewhat egg-like but with a similar mouth and eyes (I'll try to get an illustration of this eventually).

As to D6 stats, Velovich, I'm afraid I don't have any but you're welcome to use the droid and develop any as you wish. Most of the info needed is above but you're welcome to PM me with any specific questions, such as movement, articulation, etc. As Evan said elaborated above, the series being introduced in 120 ABY means it was introduced 120 years after the Death Star was destroyed, about 17 years before the current story in the Legacy comics.

Thanks, Journeyman, Eclipse. I appreciate the info.

I may do up a set of stats for this droid type, but they'd be for MSWU, which is usually EP III to IV when I start up a game. I don't see a lot of differences, though...

"All I need is more ammo, a little water, and some chips if you got them."

I think you mean Evan, I've not commented on this image thus far.

Heh, never realized years later I would have him holding an iPad... THE FUTURE!!!