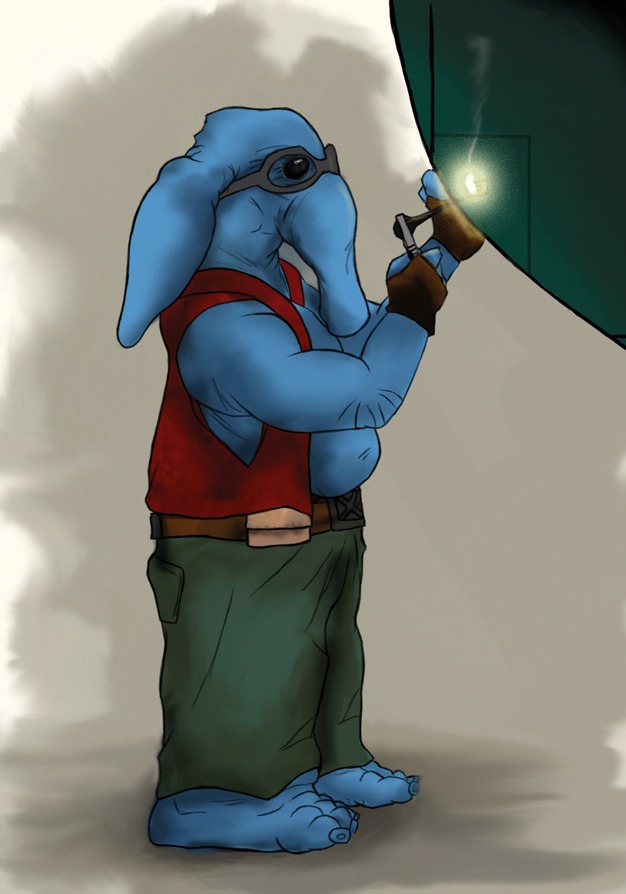 Dassa Oskaj grew up on a tiny backwater world where his greatest dream was to fly with the planetary defense force. He grew up learning to fly fast and precise making deliveries for his father's restaurant. He aced his exams to get into the local pilot academy, but because of his lack of physical fitness he wasn't allowed to take the qualifying flight runs.

Devastated, he almost gave up on his dream, until he heard about a Senator's aide who was looking for a pilot to fly him back and forth to Coruscant. Dassa showed the aide what he could do, and was given the job. He flew back and forth between his homeworld for several years, finally glad to be able to see the galaxy and fly for a living.

However, on one trip to Coruscant he was given the chance to try spice, and it only took a couple of hits before he was addicted. He flew for a few more months before the Senator's aide noticed and he was fired. He moved to Coruscant to continue his using, which he did for several years, before hitting rock bottom, living on the streets. He eventually got clean, but he still live in the lower levels of Coruscant. Today he drives cabs for a living, and keeps to himself mostly, except for the droid window-cleaner he talks to while on the job.

COME ON! HE NEEDS A RAISE. Excellent job especially the welding arc and shadows.

I know it's an odd point, but I really like what you've done with the background. It looks almost like water-colour that's been washed over a damp paper. Reminds me a little of Alan Lee...

My one suggestion is that you try doing a picture with really dark shadows. I think you'd find playing with light sources a lot of fun, and if you do one with really strong chiaroscuro (light and dark, essentially) you will find it easier to work with lighter subjects too. Just a thought.

I really like the design of this guy Drig. As Mercy suggests it would have been nice to see you make more of the lighting and shading. You have the perfect oppurtunity to play with lighting since the welding arc implies a very powerful light source. I see you've added a slight suggestion of that on his nose but I think it could have been much stronger.

Great work though, it's always a pleasure to see your character pieces! :)

Thanks everyone for your support and suggestions!