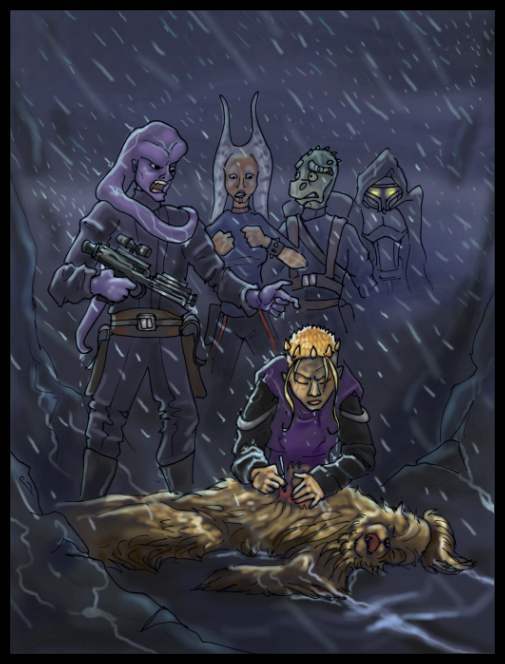 Shan Do, newly awakened in the droid body formerly known as Toaster, was exceptionally anxious to see his old Master, Umwaw Naduun. The squad was initially reluctant, as Master Naduun was a friend of theirs, and they were reluctant to betray the location and details of a Master in hiding to this smooth-talking being they barely knew. Eventually, he persuaded them to take him to see Master Naduun (who was proving impossible to contact via comm), and the squad travelled to the abandoned space station where he had taken up residence.

Still not trusting the shard in the slightest, Tusserk made a desperate effort to telepathically flag Master Naduun of their approach with Shan Do, and was rewarded with a response in the form of a great feeling of reassurance. Naduun knew they were coming, and he was prepared.

What awaited the squad at the space station was a series of trials, where they were made to re-live terrible moments from their past. Nimeq, our zabrak medic, found herself back in her days with the Iridonian Regulars, with the squad filling in the roles of her old army crew. It was the first time she ever disobeyed an order, when a team member copped a mortar in the back, and her commander ordered that she administer a lethal injection so that he might die peacefully. When she refused, the commander saw to it that he died in agony, and she had to carry that with her for the rest of her life. And here she was again, but this time it was her wookiee friend Attichuk laying on the ground with a severed spine, and Lonar hollering at her to administer the shot...

[Also note that our 'beloved' Ryn Klopan appears to have been replaced with some kind of punk rocker Togruta! What's with that?! Where's Klopan gone!? I guess that's a story for another day...]

Absolutely amazing, Tuss. Beautifully done. You really seem to have captured the feel and emotion and all that.
Great jorb!