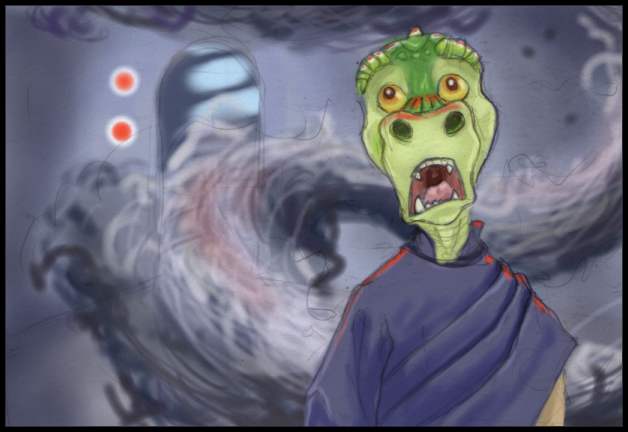 ...of course, having a rancor end up on your team is also helpful when ONE OF YOUR TEAMMATES turns on you in the midst of crashing down on some illegal slavers, with a shiny new red lightsaber in tow. And then traps you in a Force Hurricane. And then blasts off into atmosphere, leaving you with an estimated time with which to expect Imperial reinforcements.

Casually dubbed "Betrayal: You Know It When You See It", I did up this little scribble most lovingly for Toaster's player, who even threw the GM himself off guard with this most dramatic exit from the squad before he jetsetted overseas for a few months.

GM: "I had it sorted! I had a perfectly legitimate way for him to exit all lined up! I DON'T KNOW WHY HE DID THAT!"

Waaahhh?!
Tusserk's expression really does say it all here!