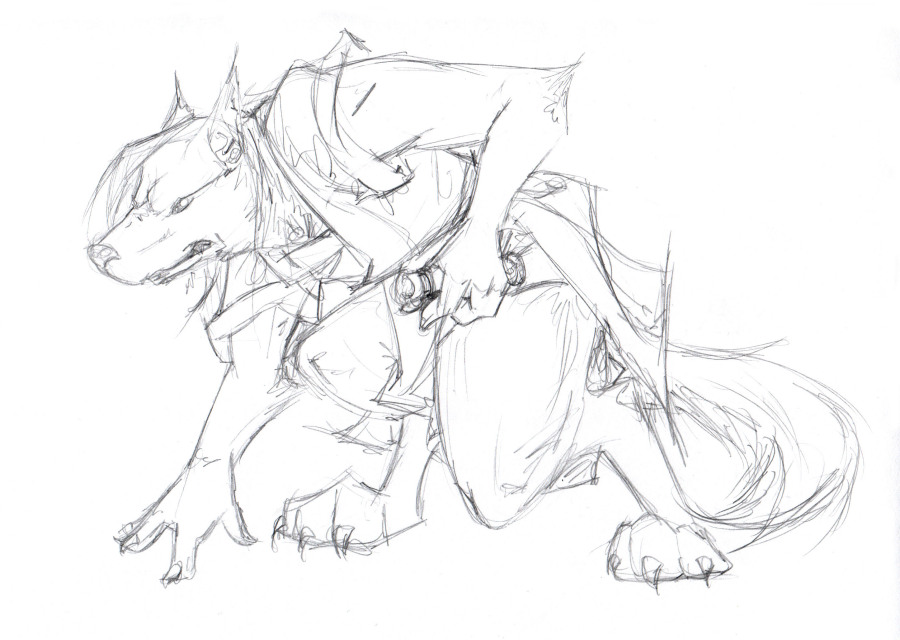 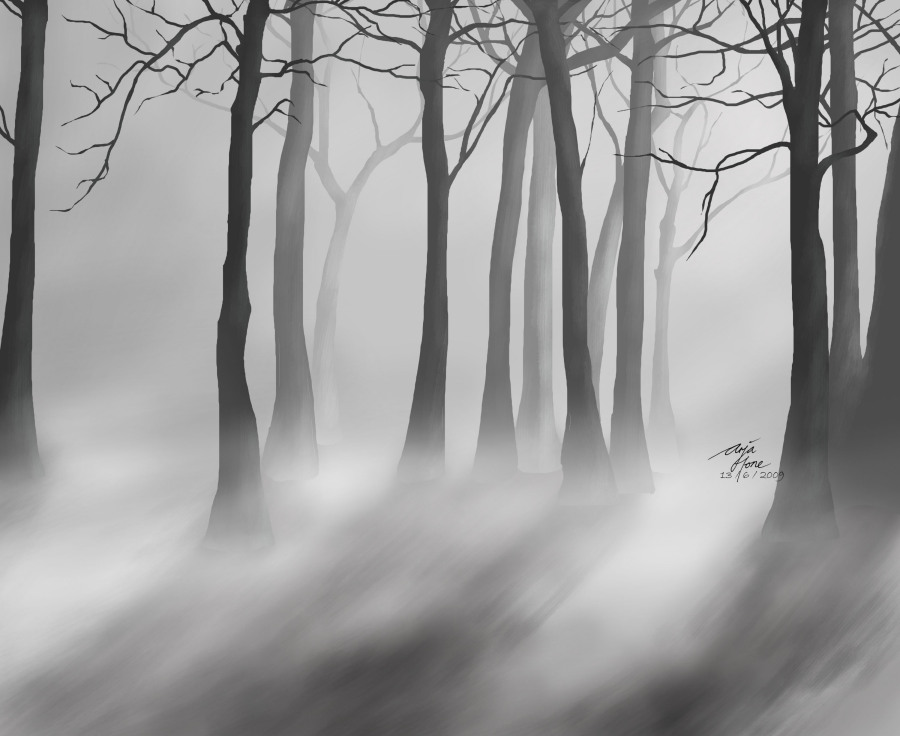 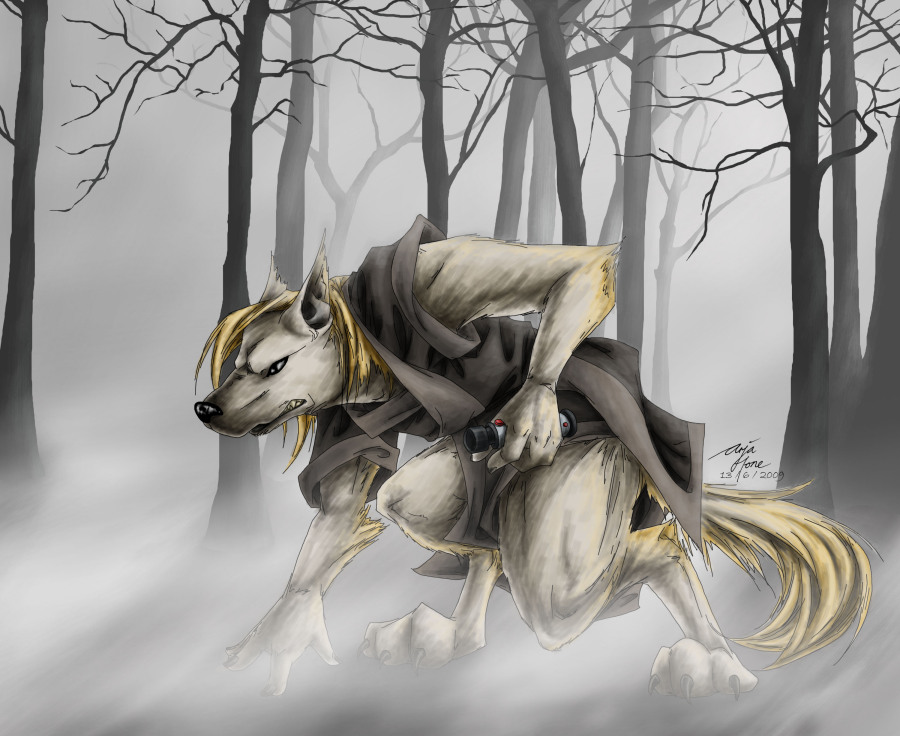 Request by the man of the same name!
Got PM'd about this one and have finally worked through my list of requests to it, so here we go!

"The definition of "Leonine" is a a furred alien, with a lion-like body, and a wolf or wolfdog-like head. One thing: Leonines do not have super-long pointy muzzles (just rather wolf-like or shorter). Since Jarrax is young (only 22), he doesn't really have a mane--just a bit more fur around the neck, I'm afraid.

He is very predatory, and extremely well-muscled. He is 6'6" tall, and weighs 350 lbs--all muscle. He uses twin ice-blue lightsabers in the Jar'Kai and Yovshin styles. Style descriptions, and lightsaber pictures can be found near the bottom of the article linked above. He carries a T-6 blaster on his right leg--found under "Equipment in the above article". Sometimes he also carries a very big vibroblade near the small of his back--again found in the wikia article. All his fur is cream-white (even the tuft on his tail), with icy-blue eyes, a black, wolf-like nose, and perhaps a strand of fur (hair) hanging down over one eye. He has a scar running over his left eye, from just above to just below it.

I would prefer him to be bare-pawed in the picture. Standard Jedi robes are his conventional clothing, but he has been known to wear dark spacer's clothes on occasion. If you choose to do an action pose, I would like a background reminiscent of a battle--perhaps he could be battle-torn, with cuts or torn clothing. If you choose a static pose, a darker, more . . . hunt-like, or foggy, mysterious background would be nice. Perhaps a pose to show off his physique.

Jarrax thrives on the thrill of the hunt and battle--he can be seen laughing or snarling in delight when fighting various enemies. His fighting style is ferocious, even using claws, teeth, or martial arts as needed to compensate lightsabers, blaster, and vibroblade. Outside of battle, however, he is patient, kind and loyal, a loner, and can be rather quiet. He is a Jedi Knight of Luke Skywalker's New Jedi Order, and he can be a bit maverick at times--think Qui-Gon Jinn "fulfilling his orders in "different" ways. Jarrax has his struggles with the dark side--in spite of his dedication to the light side, as his species is naturally aggressive. He also carries a heavy burden--the memory of his murdered brother, and his killer. At times, he may become despondent or depressed as he tries to deal with grief, and he has always wanted to find the killer. His struggles with his more primitive side are many and varied, and he has grown to despise being called an ANIMAL, because he isn't merely an animal, but also a sentient being--and a Jedi at that."

Wikia page for this character HERE.

Wow, cool! Great characterization. I think you nailed it!

I'm gonna put up the background now and then I can make a start on the colour...

Werewolves with lightsaber! My worst nightmare come ture. No, I'm just joshing. The sketch looks great and love the background. It truly is awesome.

The colored pic is really, really AWESOME. The pose of the character in crouched positon ready to pounce at a moments notice mixed with the background it WOW. You truly have outdone yourself on this one. The blend of foggy background with the fore colors are what draws me in to the pic. Keep it up Mercy,

Hey, thanks LC! That's so lovely of you!!
I just hope the requester likes it - I haven't heard from him yet...

Thanks Mercy! I like it! As others have said, the contrast between background and foreground really catches the eye! Your impression is somewhat different than what I thought it would be, but I like the way you captured the sense of "dangerous hunter" in there! I think its an outstanding picture! This has been said, but I'll say it again: you have outdone yourself! Thank you!

Thank you.
Yes, I see from your second link that you already have a character picture you use, and that it is quite different in style and over-all shape to this one I have created... However, I hope you get some use out of it, anyway!
I will now go ahead and load this picture to the gallery.

Thanks Rozali! I like interesting interpretations of my character, Mercy! (Even the picture I have on the RP is different from what he actually looks like. The picture was the base, and Jarrax has changed considerably since I saw that picture as the inspiration. Rest assured, I do enjoy this one! Please do upload it to the gallery! What, by the way, were the mediums for this? I'm guessing pencil and photoshop?