How To Do How Judas Do 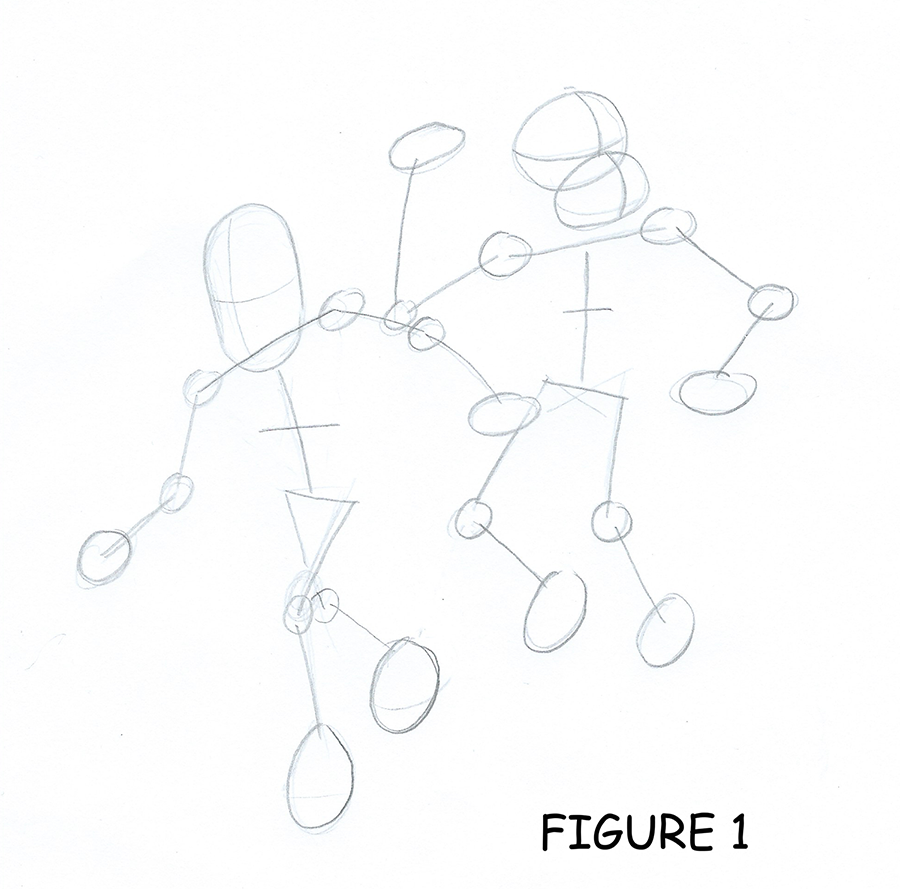 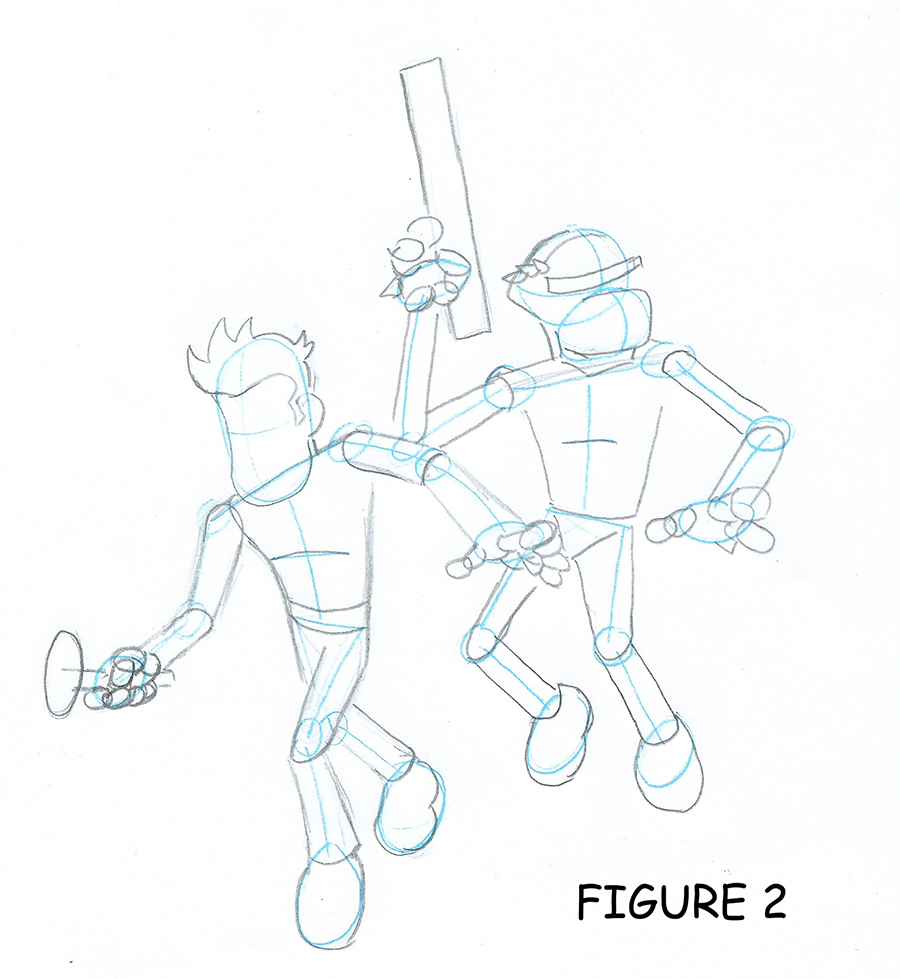 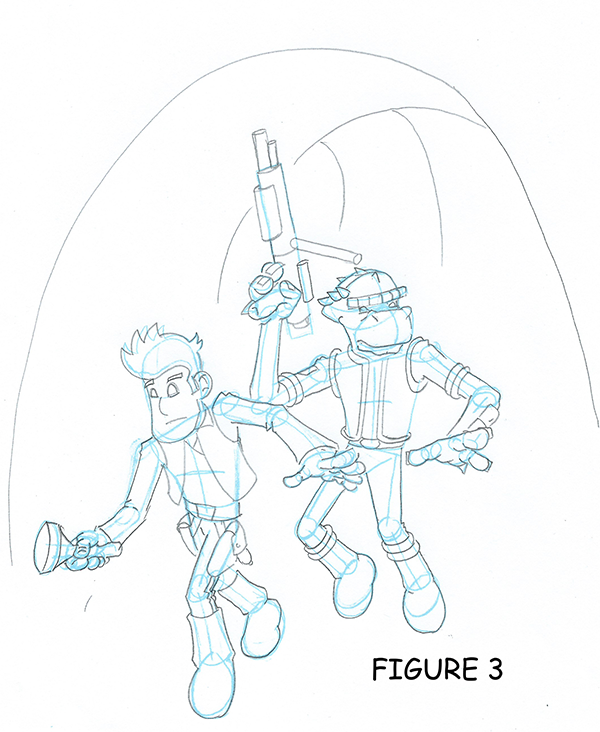 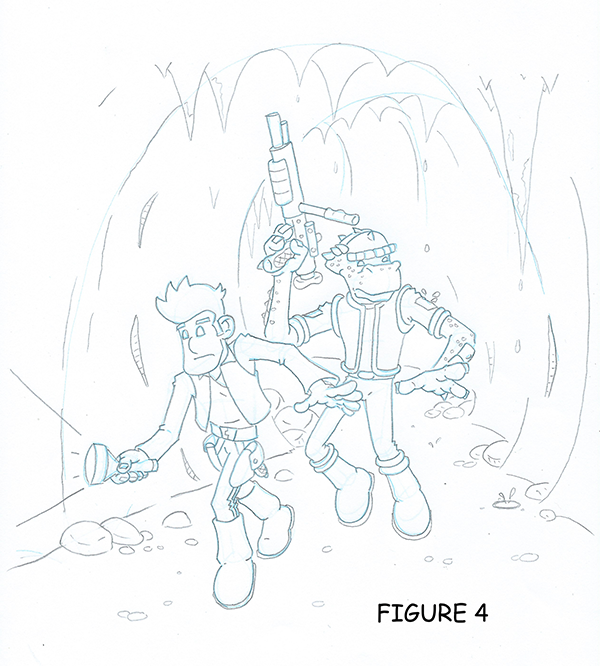 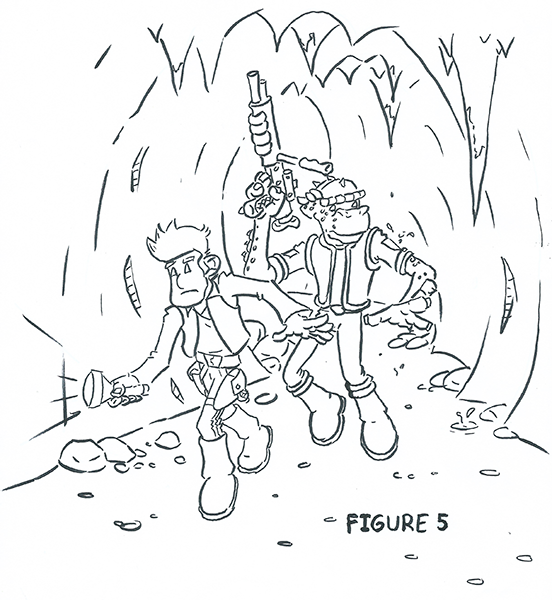 A while ago I promised to put together a tutorial on how I draw the "Judasverse".  And, since I'm out of work with a knee injury (watch out for them circular saws, friends), I've had time to throw someting together.

I've decided to draw Stand and Deliver's Chaz and Tusk (because they're my favorite characters to draw) sneaking around some caverns.

Figure 1:  Just throwing down the basic shapes here.  Notice that, even though we're dealing with a comical and unrealistic style, I still approach this stage in the classic manner.  It's important when doing a scene, even a simple scene, to show some motion.  We're capturing a moment, not asking our characters to pose for a pin-up.  The best way to get some motion is with a bit of contrapposto.

{~contrapposto, (Italian: “opposite”), in the visual arts, a sculptural scheme, originated by the ancient Greeks, in which the standing human figure is poised such that the weight rests on one leg (called the engaged leg), freeing the other leg, which is bent at the knee. With the weight shift, the hips, shoulders, and head tilt, suggesting relaxation with the subtle internal organic movement that denotes life.}

Here we have modified the technique slightly from the classic form to incorporate a walking motion.  Since I want to show the characters being "sneaky" I've made the knees bent, feet close together, shoulders high, arms in an exaggerated away-from-the-body position.

Figure 2: Now we flush out the actual shape of the body.  The arms and legs have been divided into cylinders to show their angles better.  The fingers are added as intersecting ovals (yes, I've gone back to four fingered hands), and the heads are starting to take shape. I start out with a 'peanut' shape for Chaz' head and his hair is based of Fry from "Futurama". For Tusk we toss in his mighty unibrow and start placing the head spikes.  The skull is basically a 'tear-drop' placed sideways.  I fudge the popular Trandoshan anatomy a bit when it comes to the hands.  It's just easier to have them interact with things this way.

Figure 3:  Now I start laying down the details.  This mostly consists of adding clothing and items.  I gave Chaz a great, big, 1970's era flashlight.  Why?  So that it was obvious that it was a flash light.  Drawing an actual, sci-fi, flashlight just didn't feel right.  You tend to think "Is that a lightsaber?  A sonic screwdriver?  Is he signing autographs?"  meh!  Who needs the hassle?  Also, I start defining the environment here.  It's just done simple and subdued because the background isn't our focus.  We don't want to clutter the image with a bunch extra lines and stuff.

Figure 4: Finally! The last of the details are added.  I've added hints of texture to Tusk's skin and touched up the gear. The background is flushed out more, but still kept low key. At this point we're ready for ink.  And if my kids hadn't run off with yet another of my perfectly good brush pens, then that's what you'd be seeing in Figure 5.  As it is, you're gonna have to wait for that.

Figure 5: Well, my Tombow brush pens finally showed up, so I was able to do the inks. I like to use brush tips for a couple of reasons: 1) you can get a really nice, swooshy, cartoon effect with them, and 2) I suffered from some very minor frost bite to my fingers when I was younger.  It is, therefore, hard for me to get really fine detail.  This style allows me to make steadier lines. Instead of the shaky lines I would get with a fine tip pen, I get lines of varying thickness which kinda work with this pencil style better.

Any questions?  I hope this has shed some light on my process for those two people that asked :p

Always love to see how others approach their work. Straightforward and interesting share, Judas!

I, too, enjoy seeing how other approach the craft. I'm always a little uncomfortable doing these sorts of things. Just because of the 2% that will think I'm trying to tell them how they should do it, y'know?
Anyway, glad you enjoyed it, brother.

Don't worry about the 2% that think you're telling them how to do it.  They worry about themselves enough as it is.  It is nice to see the artists work from begining to end.

All Spammers will die.. just takes me logging in to find it :)

Death's too good for 'em.

But it is entertaining to watch.  Can we feed 'em to lions or polar bears drugged out squirrels or something?

However, I'd suggest using Wampas and womp rats