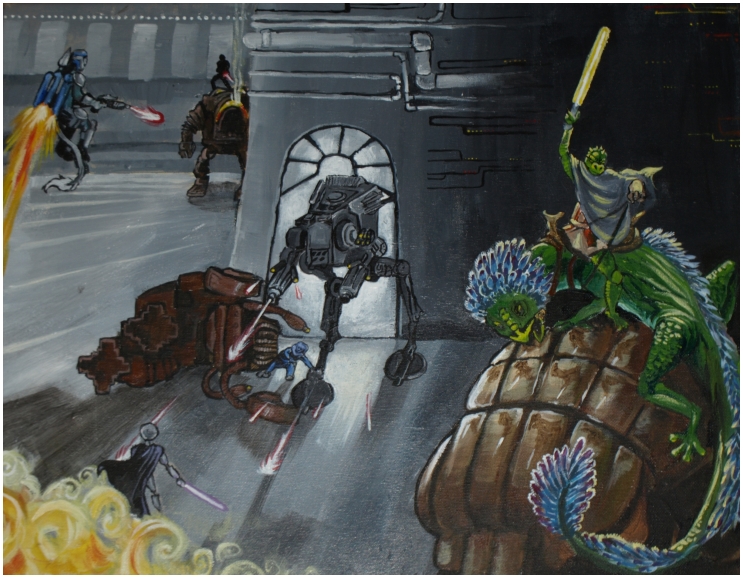 The Squad in Action

...before Toaster so abruptly left the Squad, we played a hand in liberating Mon Calamari from Imperial occupation, seizing control of a heavily guarded communications tower at a critical moment in the uprising! It was a pretty memorable fight, featuring such moments as Toaster (allegedly by accident!) throwing a couple of giant machines on top of Lonar, and Nimeq leaping on top of another said machine and 'throwing a grenade down its nom noms'. Fun times, fun times!

(Many months old now, this was also my first dabble at the squad in acrylics. It's not very great, and I know it, but it was fun, and a huge learning curve for me, so I'm not ashamed to share! I've still got a lot to learn about making believable interior spaces, and also working 'big' --I used the space so much better in my thumbnail sketches, I swear! It just didn't translate onto canvas as easily as I'd hoped.)

And WHO'S that with the jetpack there...? Who invited him!?

Awesome action in this piece. Everyone has a target and taking'em down. Just a great job on the coloring and detail.

Is that an X-1 Viper from Dark Empire II next to the AT-ST? Sweet! Beautiful colouring on the lizard critter!

Why yes, Grendel, yes indeed it is! :D