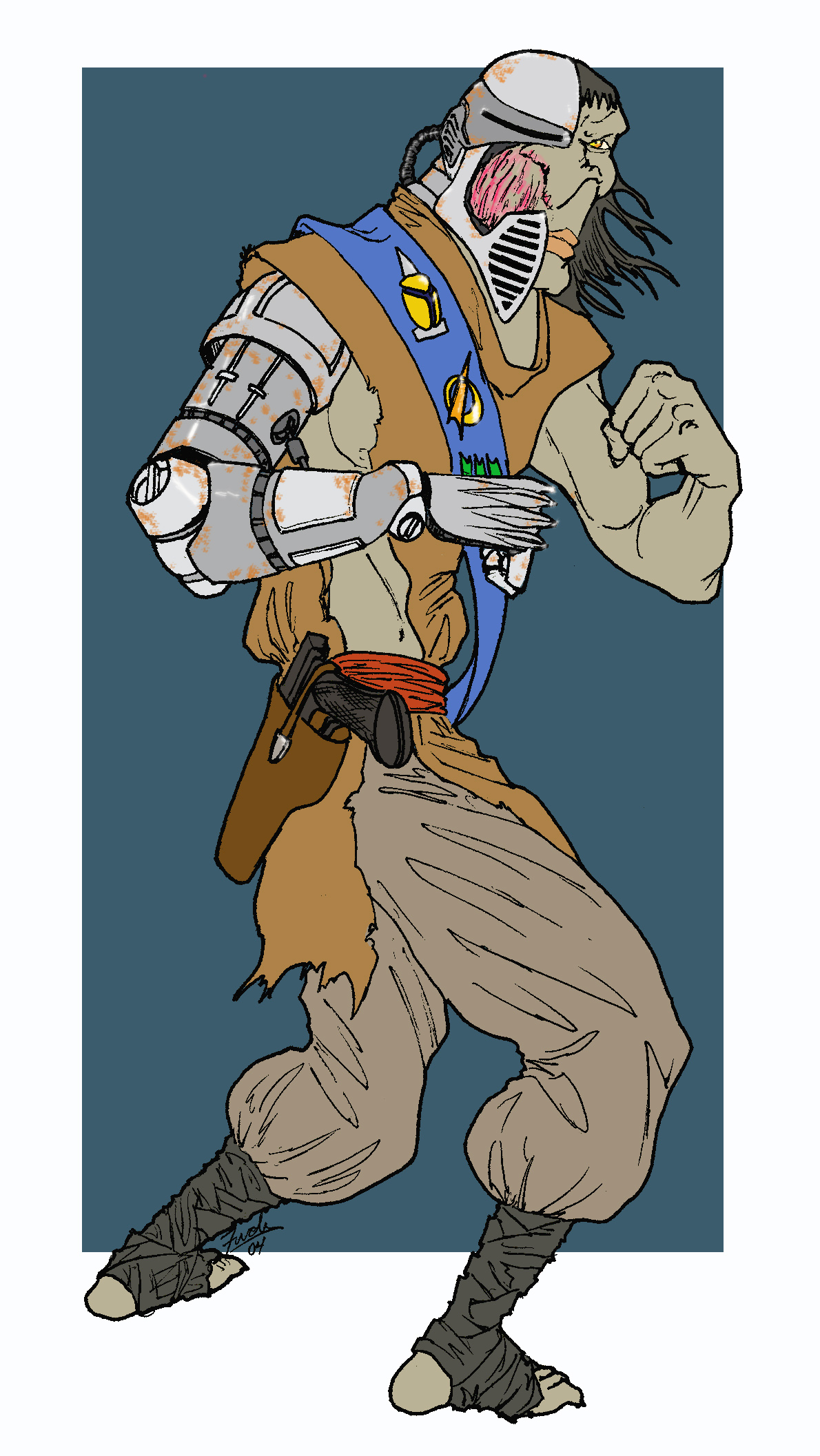 Dran Shukkan are extremely devout towards their religion and its teachings. The Dran Shukkan believe that they are the guests of Shukkanna the Benefactor at the Galla event of life. As worthy and honored guests, it is their responsibility to have the best time at “The Party” as possible. Most followers have a different opinion of exactly what this mission means, but the majority feel that it is their responsibility to have fun no matter what the consequences. As a result, most Dran Shukkan are immoral, selfish brutes who do their best to fill out the ranks of the galactic underworld. Aresnal Delge grew up as a member of Arakand Bast's gang. Though not exceptionally bright, he always exhibited a strong survivor's instinct. In addition, when given a task, he could always be counted on to singlemindedly pursue the goal to completion. Delge's particular take on devotion to Shukkanna included deriving joy from physically dominating others. Throughout his youth, he became a skilled street fighter and was one of Bast's top enforcers. When Arakand Bast's little empire started to crumble under Black Sun's scrutiny, Aresnal Delge maintained a strong loyalty to his leader. However, when a series of encounters proved to Bast that Black Sun was circling in on him, he orchestrated his retreat during a running lightfight and abandonded Aresnal Delge to the rival organization. The ensuing battle caused a landspeeder explosion which took Delge's arm, half of his face, and any kinship he had felt for Bast. The Black Sun Vigo had heard of Delge's skills and decided to give him an ultimatum. He could have his wounds healed and work for Black Sun, or he could die. Knowing that suffering a painful death was a terrible sin for a Dran Shukkan, Delge took the only option open to him. The Vigo fitted him with prostetics and ordered him to find and kill Arakand Bast. By that time, however, Bast had gone into hiding. After months of fruitless searching, the Vigo received orders to drop prusuit of Bast's gang. They were no longer a threat. The Vigo did not believe Bast to be dead, however, and left Aresnal Delge's orders in place. As the months dragged on with no sign of Bast, Aresnal Delge took up fighting as a means to survive. Within two years he was one of the most successful prizefighters in the Outer Rim. Delge, however, never forgot his orders, and privately kept up his hunt to find and kill Arakand Bast on sight.