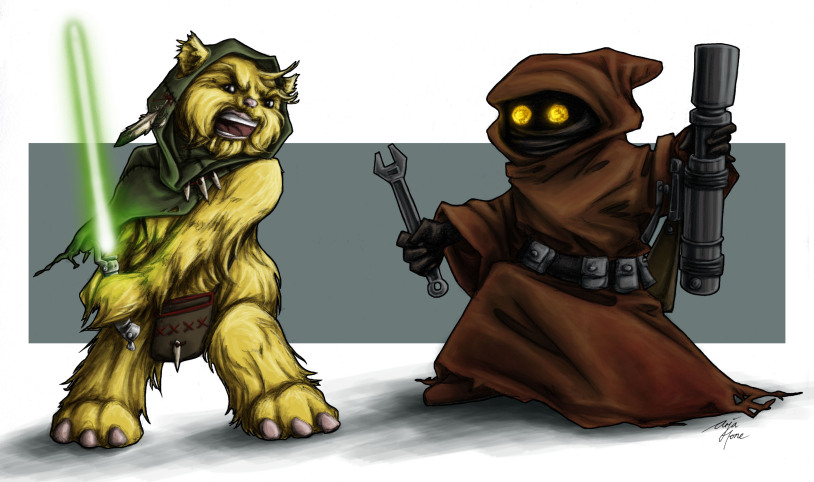 The request was simply 'Ewok vs. Jawa'.
And I remembered a little snapshot description Judas painted for us here;

"My friend Jay plays a Wookiee Jedi with the unfortunate name of 'Heycanigetagrenadelauncherattachedtothatbong' and he insists that we refer to him by that name. He constantly calls on the darkside to kill baddies, then spends force points to burn off the darkside points. Then does it again.
My wife plays an Ewok force adept named Pikachu (are you starting to see what I've got to deal with here?) and they somehow convinced me that she can use Force lightning without incuring darkside points because "she's just so cute".
Btw, Heycanigetagrenadelauncherattachedtothatbong carries Pikachu around in a hot-pink belt pouch and, when it's time for battle, flings her at the enemy screaming "Pikachu, I choose YOU!"
Bam! Force lightning and death!"

So, naturally, the Ewok must be bright yellow.
I was wanting to base the Jawa on Judas' 'Howdy Jawa' character - I don't know if that really happened but I did have to resist the temptation to give him a thought bubble swearing in Jawaese...

In any case - I certainly enjoyed myself with this one!!

That is just cute. Never mess with an Ewok with a lightsaber. Some Jawas are just to pushy when trying to make a sale.

YEAH!! I totally win B-Days this year!
Thank you, Mercy.

This truly merits the word "epic". I love it!

Hee hee!! I'm glad it went down so well - love the idea Judas, and had a great time doing it!
:o)

My vote goes for the Jawa to win this battle, but I'm admittedly biased since one of my first characters (and still my favorite) was a Jawa commando; it was all fun and games until he killed off a few Force-users, obliterated several squads of Storm Commandos, single-handedly destroyed a Star Destroyer, and landed the #1 spot on the Empire's Most Wanted list.

________
Links removed because the spam filter apparently doesn't like me, but I shall have vengeance. And maybe beer. Beer and vengeance.

Ma ha ha! He certainly sounds like one to be reckoned with!!