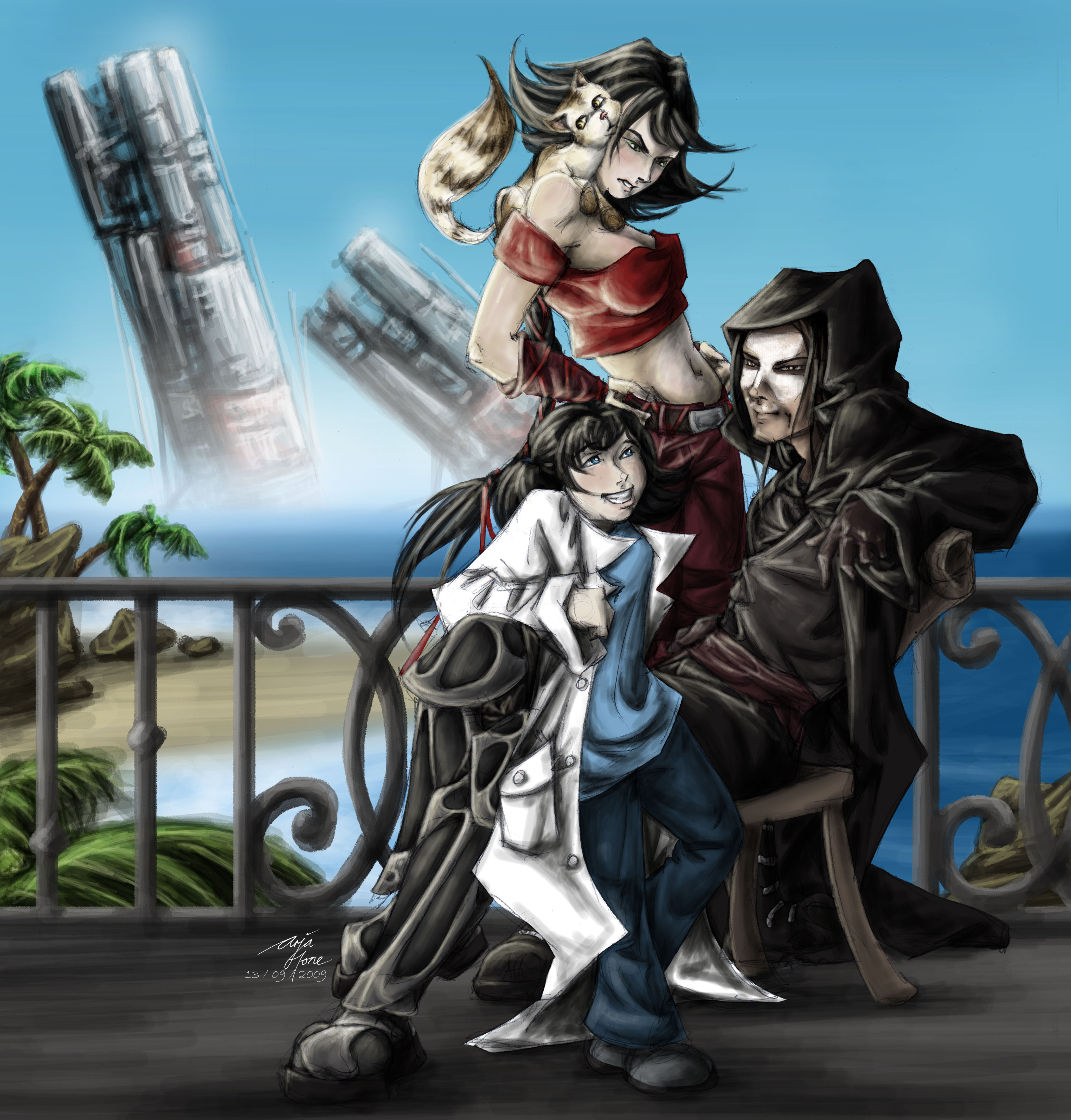 "Hey Mercy, I Had this Idea of a 'Family Portrait' Of Our Sith Characters! Besides Mainyu an Triss, there is another member of their group that goes relatively unseen. A Nine/Ten year old Girl Named Mina, She was discovered by Mainyu when a ship crashed on Lehon. Her hair is black, done up in pigtails. Her skin would be very pale because she has a condition in which her eyes are over sensitive to light. She is Mainyu's lab assistant, so she usually wears a lab coat.

In this Pic I imagine Mainyu standing with his arms crossed, smiling. Mina stands next to him making a funny face at the camera and Triss looks at her, annoyingly like a Big Sister with Tails on Triss's shoulders."

BLOG HERE - with some of the extra sketches that didn't make it!

"Pimp daddy" Darth getting his thing on with the schutta's. Great job Mercy.

Very cute little detail, of the family pet on the mom's (or older sister?) shoulder. The background is really nice, a bit of an island tropics beach and palm trees, with a couple of crashed large ships in the distance. I guess that might explain how the family was marooned on such a place (with any other survivors).

Its been a long while since I've last been here, and your work is top notch as always Mercy. :)

For those interested, the stories surrounding these characters can be found at the bottom of Triss' Wiki profile HERE. As for the background it is Lehon, the Rakata 'Lost World' featured in the KOTOR RP Game.

I'll start out with the good. Mercy, your artwork continues to evolve and just keeps catching my attention on SWAG's "Newest images".

But on the other hand... a Sith sitting around in a cozy family setting? C'mon! I remember when "Dark Lord of the Sith" used to inspire fear as something strange, dark and dangerous. Now, we see power-tripping teenage Sith Lords all over the place; the mystery is gone.

Don't get me wrong, RPG's provide a healthy way for some people to have some ego-tripping wish fulfillment, but whatever happened to original, well-rounded characters?

I know that we - the requesters - can do better. And the artists will thank us for it.

Jace, it is pointless, and rude to downgrade someones request, please refrain from doing so. The request was made, and the piece was done, please don't be a critic unless asked to do so by the requester. Thanks.

I think it's important to know the background of these characters and, therefore, this request.
Now, I've been drawing pictures of these guys for a while, but I still haven't read through half of their adventures together! So I hope I'm not speaking out of turn here, but this is what the picture means to me;

Mainyu is a dark character. A Sith from the start, not a fallen Jedi and wooed to the darkness. He fought and suffered for the Empire, but the Empire let him down (at least, in his eyes) and he was relegated to a backwater planet to live out his years in obscurity.
Triss, on the other hand, is wildness incarnate - she was taken as Mainyu's apprentice when she inadvertently found herself within his domain and I think he had meant to make her his tool, and perhaps even his successor.
Neither of them have ever had anyone to rely upon or trust but themselves. And, thrown together with little Mina, they became the family they never thought they would have, or could even understand.

That's what this picture is to me. A moment of unity - dysfunctional, crazy, misunderstood, but a family none the less.

You can't say that these are not well-rounded characters!

Okay, I know they may not be the 'dark, brooding lord of the Sith' or 'sexy Sith witch in red leather' that you expect, but surely that is a good thing!
I do understand your frustration, and sometimes it's nice to have a rant, but I feel that you have contradicted yourself in your own post. These characters are very much original, they are also very dark in their own right - perhaps not necessarily in this picture, granted, but I suspect that the picture requested was really for the requesters. It was what they wanted and I am very happy to continue producing work for them.

So thanks for the compliment but please understand that these characters (like your own) have their own back-stories that the requesters are understandably attached to.
Please try to keep your comments constructive and the site will be a better place because of it!
~ Mercy

Whoah, if I came off ranting, that was not my intention. The problems of not being to be able to articulate speech patterns / voice stress - or in this case, lack thereof - on the internet, I guess. :P

I was also not attempting to put anyone down. I love everybody. :)

But I still stand my ground, because that's my opinion and I'm entitled to it. And I'm stubborn, too. ;)

You should watch your words more carefully then. Because your first two paragraphs are a direct attack on the requester, whether they are meant that way or not.

You said ... "I'll start out with the good. Mercy, your artwork continues to evolve and just keeps catching my attention on SWAG's "Newest images". "

To me, that means... I'm going to say something good about this piece, then I'm going to say something bad about it. But instead of saying anything about the piece of artwork you went into a rant over seeing "power-tripping teenage Sith Lords all over the place; the mystery is gone." Which to me has no place on the image its self. Perhaps I didn't restrain myself enough, as Mercy's P.S. seems to suggest to me, because I think I'm reading some sarcasm in it. But it just seemed unacceptable to me, for anyone to go off on a piece of art, because of what was requested.

You do have a right to your opinion, and by all means let the requester know it if you think its important. But putting it on the image that someone made for them to me, is rude. Sorry, but that is my opinion on it, and I am also very stubborn :P