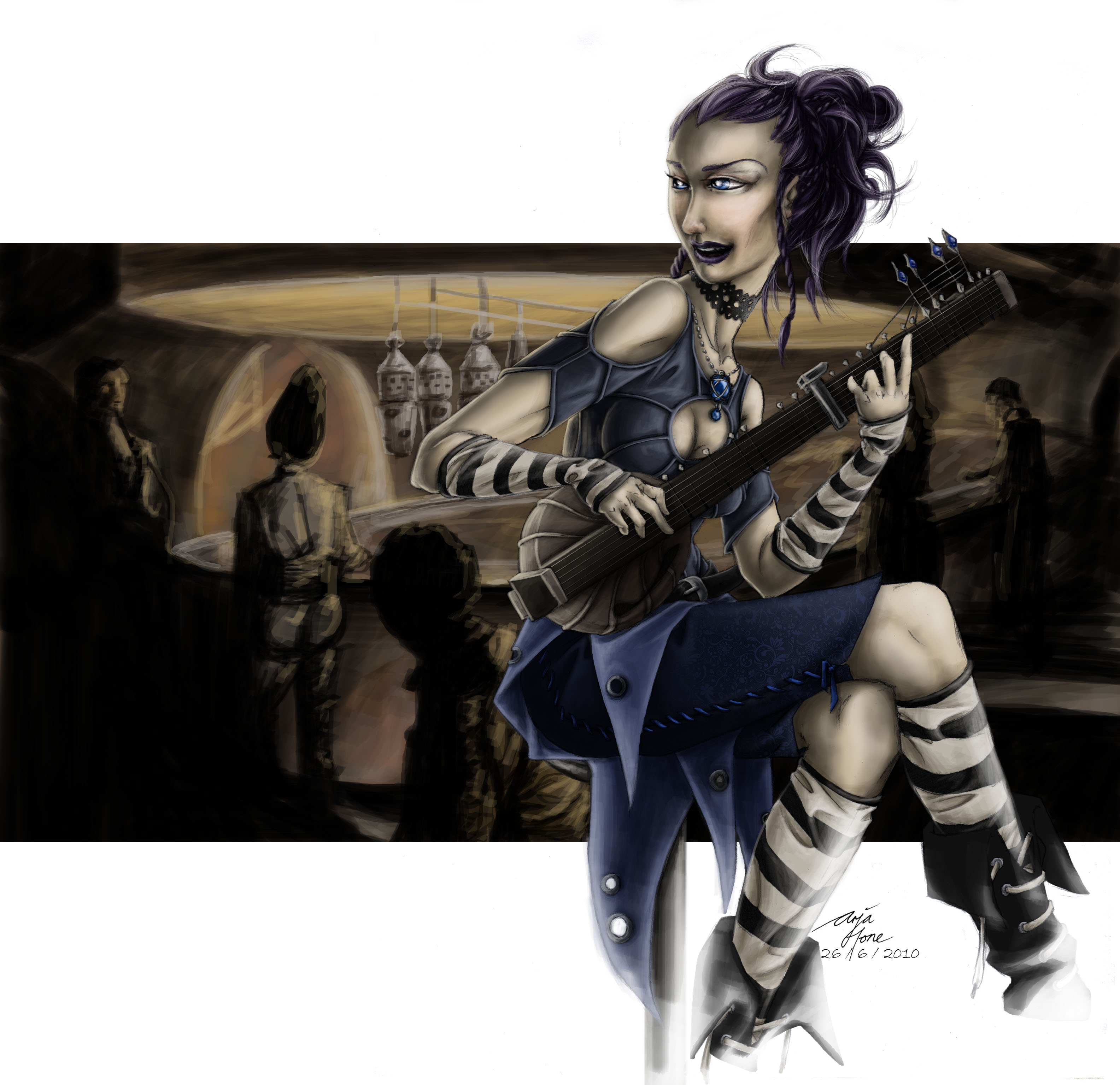 New request from I. J. Thompson;

"Okay - I've been playing this particular character for almost three years, whom I've never made a request of to anyone, because she's just so dear to me.

Fiola Shaku is a musician of modest fame, who has since found herself on the wrong side of the law, and on the run. She's cheery and upbeat, but with a sarcastic side, and she has trouble allowing herself to care too deeply about others.

Fi is short, fit, and petite. She's modestly-busted (I hate to have to say that, but it's rare in the world of sci-fi!) and often has a bit of a smirk on her face. She tends to favour boots over shoes, and tight, functional clothing in blacks and blues. But please feel free to leave out the 'glass helmet' thing she's wearing in her portrait (I tend to think of that as a costume bit from her 'rock star' days)."

I've really been enjoying your style of background integration - using a backdrop, without placing the character within it. It's like a photo shoot! Great job!

Yeah, I'm still having fun with the style. Means I don't have to be too perfect with the backgroundm and can have a bit of fun with it.
Anyway, we'll see how long til I get bored with it, huh?!

Mercy, thank you so much for this amazing, amazing picture! True to form, you took the idea and ran with it, elevating the character well beyond anything that I had thought of, or asked for. From the fantastic costume/hair design, to the moody, atmospheric background, to the inclusion of the mondoviol (didn't see that comin'!), it has been a complete delight to watch this picture take shape... truth be told, I'd have been satisfied with the original sketch alone! :D

A quick note to any other requesters who may be reading: at one point, I wanted to 'get a hand in', and asked for one element of this picture to be altered. Mercy graciously obliged and, when the change was made, I realized that both Mercy and I liked it her original way, better! This was a great lesson to me in 'just stand back and allow these SWAGgers to work their magic', and I intend to heed this lesson in the future! :)

I hope this works.

Mercy, excellent job! (The details of the praise were in the mail I sent, since I couldn't post a comment here, because Captcha is a broken thing.)

So glad you all like the finished piece!!
I. J. I really did love doing this for you, and your enthusiasm for the process as well as the picture has really made this a joy to complete.