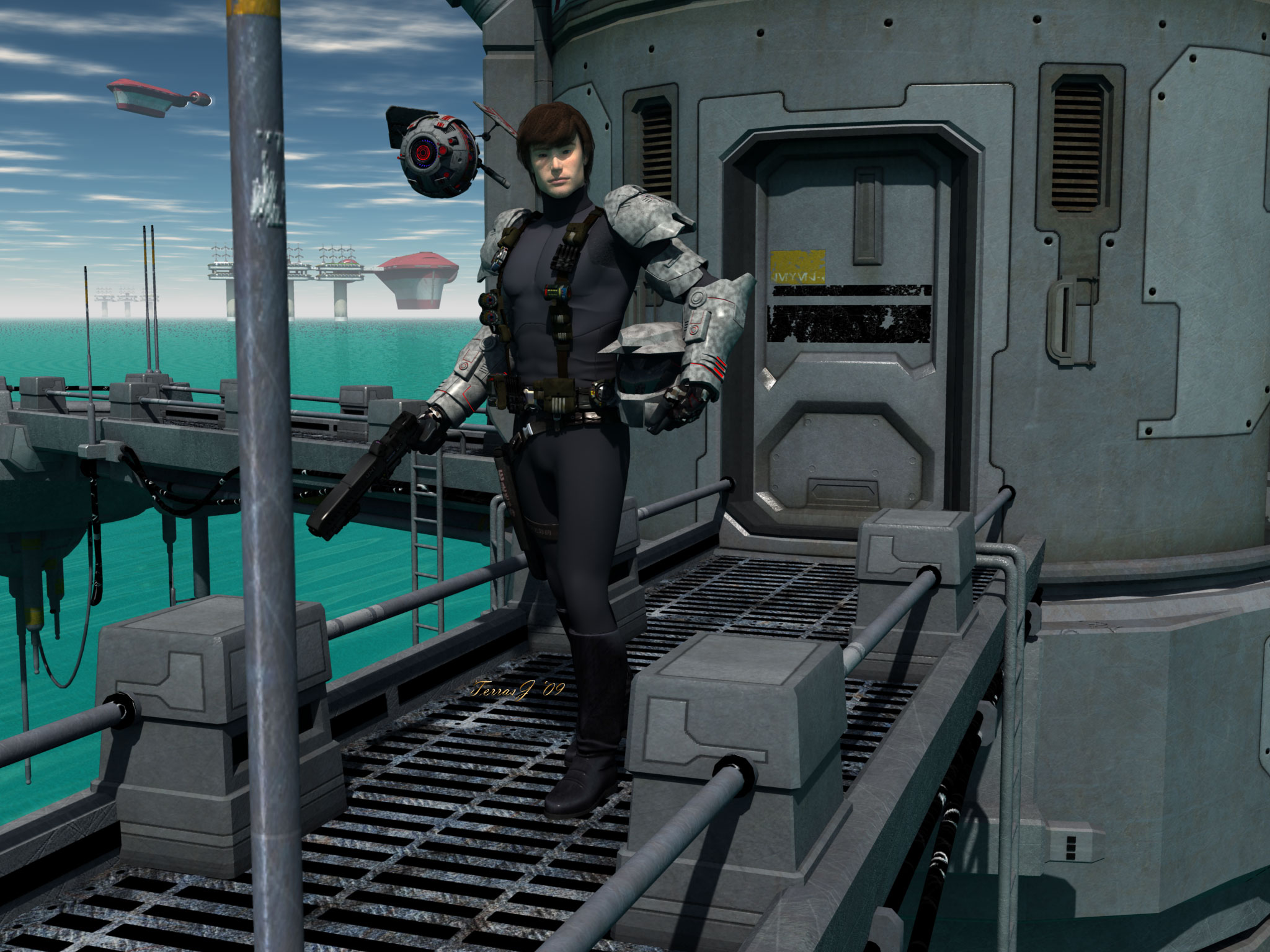 In short, EliasWindrider wanted a male human mercenary, in a body suit with some powered armor pieces similar to the female version he posted via image link. While I couldn't provide the exact suit he was asking for, I was able to provide a similar outfit, mix and matching with a second set. Same deal with the Carbine. The pose however I was able to match close enough. The background and scene was left open to the artist.

So, I had an elevator / bridge / landing platform I was able to use, and modified it show as having multiple ports. Then I chose a nice open ocean for a landscape with a bit of early morning haze / mist on the horizon. While I provided some initial lighting setup sample renders, what really helped was getting Elias online in yim chat, as we were able to spend a couple evenings custom tailoring the scene to his preferences. I was able to toss up multiple test renders and screencaps of the scene within the 3d app, until Elias was satisfied.

From there on, I finished up the scene adding a few extra sets and models I had on hand, an AA-9 Civilian transport (as scene in SW II, Anakin and Padme boarding for Naboo ala low profile after Jango's failed assassination attempt). And a freebie offshore UofS type platform by Chris Muir @ ShareCG which only needed an extra passenger boarding bridge to connect to the AA-9 transport. The triple platform and ships are distanced around 4km - 8km behind the character, with some camera depth of field added in the render settings.

I would've liked to add more little details and props, but Carrara had begun crashing midway through the final good quality render, so it was a bit trial and error finding out the culprit. Unfortunately, it took longer than I expected, having been busy with seasonal outdoor cleanup. I had to go back and tweak a few minor details and re-render a good quality version, thus a little extra delay.

No postwork done on this image, save for adding my signature. Enjoy!

Wicked! The 3D work is out of this world.

Thanks TNJadeonar, this is REALLY close to what I was hoping for... TNJadeonar was very patient with the back and forth. (By the way what color is his hair?) I think that the scenery makes the picture, one of the details that I like is how the hover droid is partially silhouetted against the horizon with just a tad over the elevator section. For the rest of you, this http://images.community.wizards.com/community.wizards.com/user/eliaswin…
was the armor I had requested (but I did not expect anyone to find a 3D model of it), and he got the helmet pretty much dead on.

If intermediate 3d modeling were part of my skill set, modeling a near replica set of male armor would've been iffy, not wanting to step on anyone's toes, then theres still some room for interpretation since its a pose limiting the view of the armor on the frontal side. Though I'm happy I was able to provide a similar in function set of armor from one of the figure apparel sets I did own. The helmet was from a different and freebie set, since it resembles a certain likeness to another powered suit of armor. I used my own custom made shader, and applied it to the hard armor pieces, so they appeared to be part of a matching set.