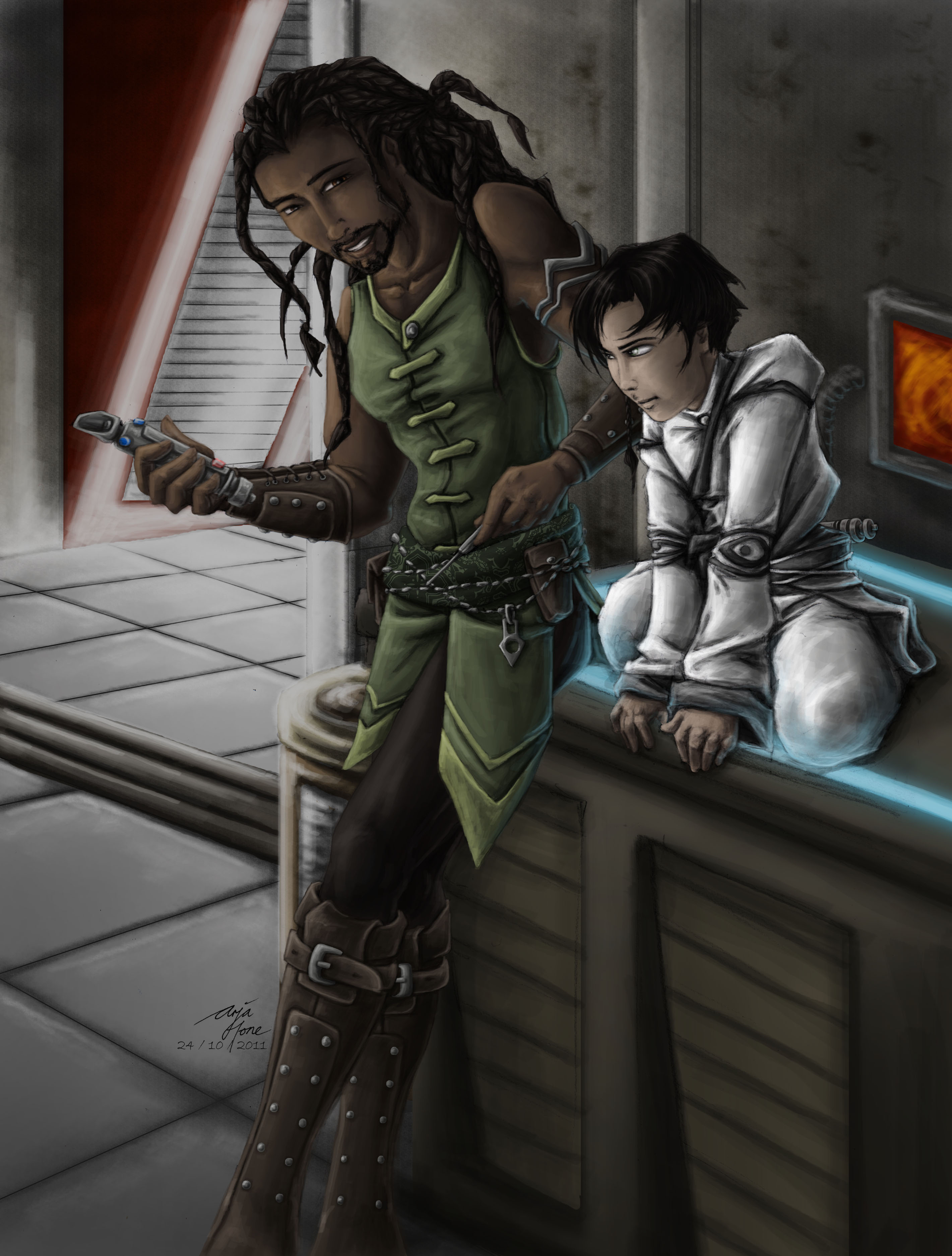 Khol Torendau
Khol is extremely tall for his age at 1.98 meters, and still growing. His time as a slave and the years of physical training under Master Ruhk have turned him into a powerfully built young man, although he still suffers from the gangly awkwardness that affects so many teens as they go through their transition into adulthood. Hazel-eyed and darkly complected, Khol tends to wear his hair long and in a multitude of braids ending in pearlescent cowerie shells, in an old Korunnai custom, with his padawan braid generally dangling into his eyes.

Khol tries his best to keep his newly-grown facial hair groomed into a goatee and beard, with varying degrees of success. His shy smiles, emerging pleasant baritone, and the old scars criss-crossing his arms and back have earned him more than a few appraising glances from the young women onboard, something he appears to be completely unaware of.

Now, it's not often that I decide to ADD a character! ;o)
But I couldn't resist when I saw this guy, who is another of Anazider's characters:

Ash Peztar
A handsome pre-teen (he's twelve, with a birthday coming up soon) with jet black hair and arresting eyes of almost silvery grey, Ash looks and acts peculiarly mature for his age. He doesn't often smile and his eyes are fierce. He carries himself with a tense "fight or flight" bearing of one who expects danger around every corner. This is a boy, it may occur to a witness, whom has been through many hardships.

Ash wears the robes of a Jedi initiate, and owns two sets: one a dazzling white, and one black as night. Whichever set he chooses to wear in the morning tends to be indicative of his mood at the time of waking. His all-temp cloak is tan. Ash wears a bracer computer on his left arm, finding it more efficient for use in an active lifestyle than a handheld device. On both hands he wears fingerless gloves that improve his grip, each of these have clasps stitched in on the back of the hand ideally sized for the attachment of a halo lamp - a trick learned from his gang days to provide light without sacrificing the use of either of his hands. Aside from a utility belt, Ash carries nothing else save his weapon, a long-handled lightsaber. It is strapped to his lower back at all times, arranged for easy access by his right hand and clasped in such a way that it will come free in one fluid motion. As a training lightsaber it is hardly unique except in the matter of the handle's length: it is otherwise unadorned and purely functional, with a bondar crystal inside to make it safe. The blade is the most common shade of blue. Ash has said more than once that he's not a huge fan of the colour blue and wants to pick something else when he is allowed to build his own lightsaber.

I like this picture. The room seems to be the one from the Enclave on Dantooine. The adult reminds me of the guy from Stargate: Atlantis. Thumbs up on this one.