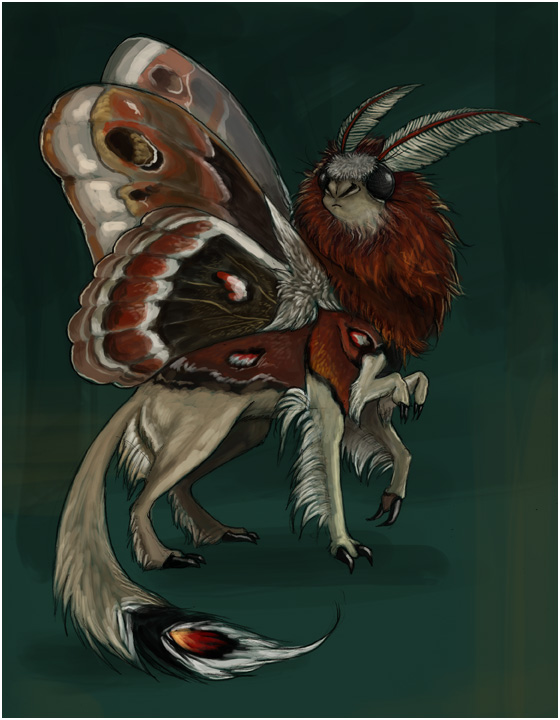 So here's a critter dreamed up (quite literally) by Rina that she was hoping to see drawn up... uh, as realistically as possible, I guess? A sort of cat-moth thing that could well serve as some PC's beloved pet.

I'd like to imagine that this is very much a domesticated animal- in the proper sense, not the traditionally-and-improperly-used-by-fiction sense, ie, you would NOT actually see these animals hanging out in the wild anywhere. (Excepting for introduced/feral populations, perhaps, but let's not complicate things by going there, ahaha.)

It's a constant source of frustration to me that the concept of 'domestic' isn't handled properly nearly often enough; there is very rarely any actual distinction between wildlife and what characters have as 'pets', which is sad because the process of domestication produces so many fantastic, crazy variations on a theme. We don't have pet wolves (well, okay, some people do, but that's an argument for another day and another forum, ahaha) - we have dogs, and the amazing and often absurd variety that dogs these days come in. A pug 'in the wild' is not going to do terribly well for itself. A wolf as a pet is not going to be nearly as easy to integrate into the family as your average dog, and a single wolf raised in a household that is affectionate to its family doesn't qualify as 'domestic'. A domestic sheep or cow is easier to handle, infinitely more useful to humans, and vasty different, from their wild derivatives. A merino left 'in the wild' without getting shorn or being protected against getting flyblown is going to suffer tremendously.

So going back to the mothcat... whatever planet they originated on, whatever wild critter they were originally domesticated from, would be very different. This animal is of a convenient fold-up-in-your-lap size, it is cuddly and personable and very, very pretty. Its predecessor would be much smaller, far less vivid in colour, painfully flighty and skittish in nature, and stress easily. They are different animals!!

I'm not sure if that is ugly or cute...#confused

I LOVE IT, I LOVE IT I LOVE IT! Those colours are so amazing, and that TAIL, THAT TAIL LOOKS AMAZING, I LOVE IT. and i can totally pick out the big huge eyelashes now, and that tuft of fur that connects the wings to the back looks so freaking good oh man

AAHHHHH THANK YOU FOR DRAWING THIS IT IS SO GREAT

That is just super-cool.   What a great little animal.  I want one.  It would get along great with the two long-haired chihuahuas.  :D

This is a wonderful addition to your long profile of work.

You combined two of my favourite things (insects and small furry animals) into one fantastic thing.