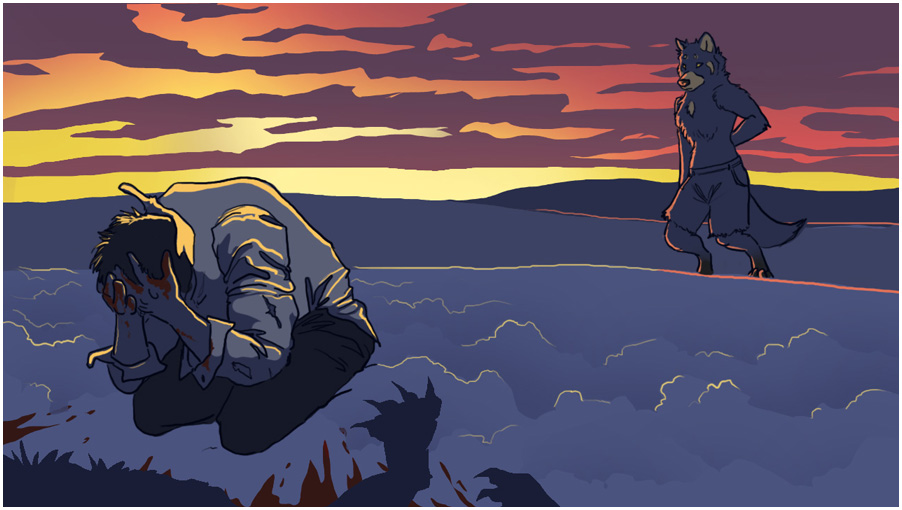 That time on Csilla...

From way back in the earlier days of our campaign. This was the moment I realised Jak was head-over-heels, and I think she realised it deep down as well, though it took a little while longer for her to readily admit it.

Jak skidded across the ground, ploughing through the snow for the umpteenth time that evening, but the physical hurt meant little to her. That was nothing after being knocked unconscious several times and having her eye blown out in short succession.

The other sort of hurt, though… she gritted her teeth and screwed her eyes shut, pushing past it. No. She couldn’t take it personally. He warned her, she’d been full expecting him to lash out. Hell, he could have done a lot worse. A lot worse. Pulling herself up, the Shistavanen once more steadied herself, once more took a long and shuddering breath, and realised that her whole body was trembling. She looked to Lokhin… and was taken aback by what she saw.

For several long moments, she stood dumbly in the snow, in the gradually purpling light of a never-ending dusk. This fell entirely outside the directives she was ‘born’ with, and there was no reference point in her Shistavanen instincts that could guide her behaviour. Your superiors don’t show weakness like this, it ain’t proper Shistavanen!Hell, if this was the way he’d been when she first saw him, no frakking way would he have caught her attention, she wouldn’t have thought twice about tearing out his awful monster throat like the rest of the squad had, at one stage or another, been so keen to do.

But, she realised with a start, she was seeing him this way now, and she gave a hell of a damn about him. She ached for him, and for the first time in her existence she felt a sense of purpose, something to live for, beyond those instincts and drives she was created with. She felt like more than just… just somebody else’s product. It was terrifying, and just a little bit brilliant.

She couldn’t stand seeing him so distraught, and it wasn’t some altruistic desire to ease the pain of the universe, it wasn’t some macho discomfort around tears, it… it was… him. She adored him, and wanted to stop him feeling whatever it was that hurt him so bad. But she didn’t know how. She didn’t know what to do. What do folk do, when stuff like this happens?

Hesitating only a fraction longer, Jak padded over to Lokhin. She sat down beside him, gently pulled him up, and shielded him from the biting cold. That much, at least, she could do. “‘m so sorry, Doc,” she murmured, not sure if he even heard.

Addendum: THIS description is oddly beautiful.

The sunset effect is beautiful.

Ahh. Topless Jak. Was this nudity nessasary for the script? LOL...great art.

It was established long ago that she's fuzzy enough for modesty to be preserved. ;) And that's the way it happened... this is well before she had her Vong-tech shapeshifting clothes, and she didn't want to rip apart her one set of gear. She thought Lokhin was daft for monstering around in his good clothes!