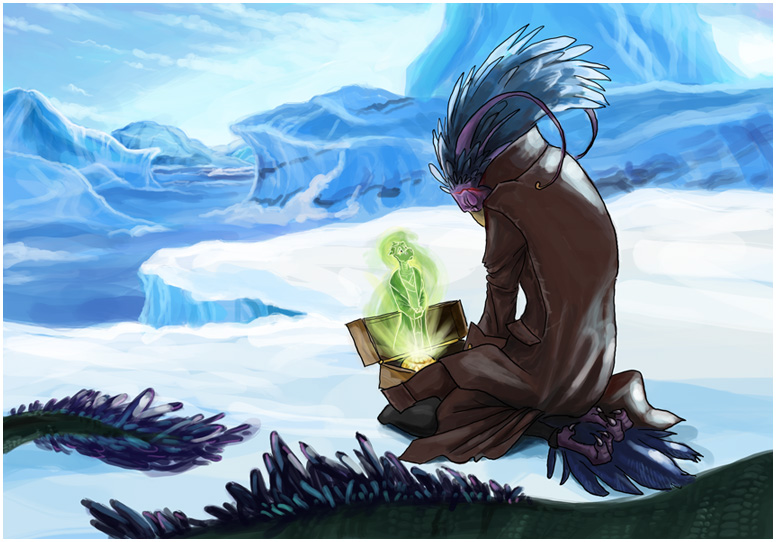 Some of us love to pad out or between-session 'down time' with a bit of extra narrative, generally played out via email. It's also a great way to have lengthy conversations that we don't necessarily want all of the party to be privy to. Such has been the case between our poor dear Evi, and a certain holocron she's had in her possession for quite some time... which has fiiiiiinally been revealed to the rest of the group, so I'm at a little more liberty to illustrate, haha. Unfortunately, said holocron has now been handed over to the monstrous beings that have been hounding us, and the whole experience was something Evi didn't handle particularly well.

Put commas between the categories you want for you image, not spaces :-D

Fantastic piece. The depth of emotion your pieces have been capturing lately is really awe-inspiring and the holocron effect is also top notch. Hard to argue with art this great.

Seconded on all counts! Wish I could do landsscapes like this.

Haha, thanks Eclipse!! I knew I'd done it wrong when I saw the posted image... just sort of crossed my fingers and hoped, at least I can get it right next time. ;) And thanks for your comments too, it kind of feels like an extra special honour when the chief of SWAG himself has something to say about my work!

Hey, I'm just like anyone else around here, except I can screw everything up. ;-)

Actually you should have the ability to update the your images now. So you can fix any image you own. ;-D

Also, feel free to work a bit larger if you want. There's not a height limit any more, and the width limit will fill the page. The image will also link to whatever original you upload so people can really see the details if you want to work at larger sizes. Mercy always works at ginormous sizes so almost all of her work will illustrate what I'm talking about. Obviously, images are whatever size you made them, but gone are the days where we have to be super strict about that.

Awesome! I know some people tend to do really elaborate and detailed pieces with a lot of background design etc. This is an awesome change, like all the others you've made so far!

I was always better at deatails in the front, now I don't think I could even try doning a nice background anymore.

This is incredible! In fact, your entire gallery is hugely inspirational (I've just been catching up!) :) Keep up the amazing work!

Augh, dude, thank you so much! You have no idea how much of an inspiration your own stuff has been to me, since right from those very first days when I was taking my first few stabs at Star Wars character art of my own...!

I think I've kind of fallen in love with this character thanks to the art you and Rina have produced of her.

You really can convey emotion so well.