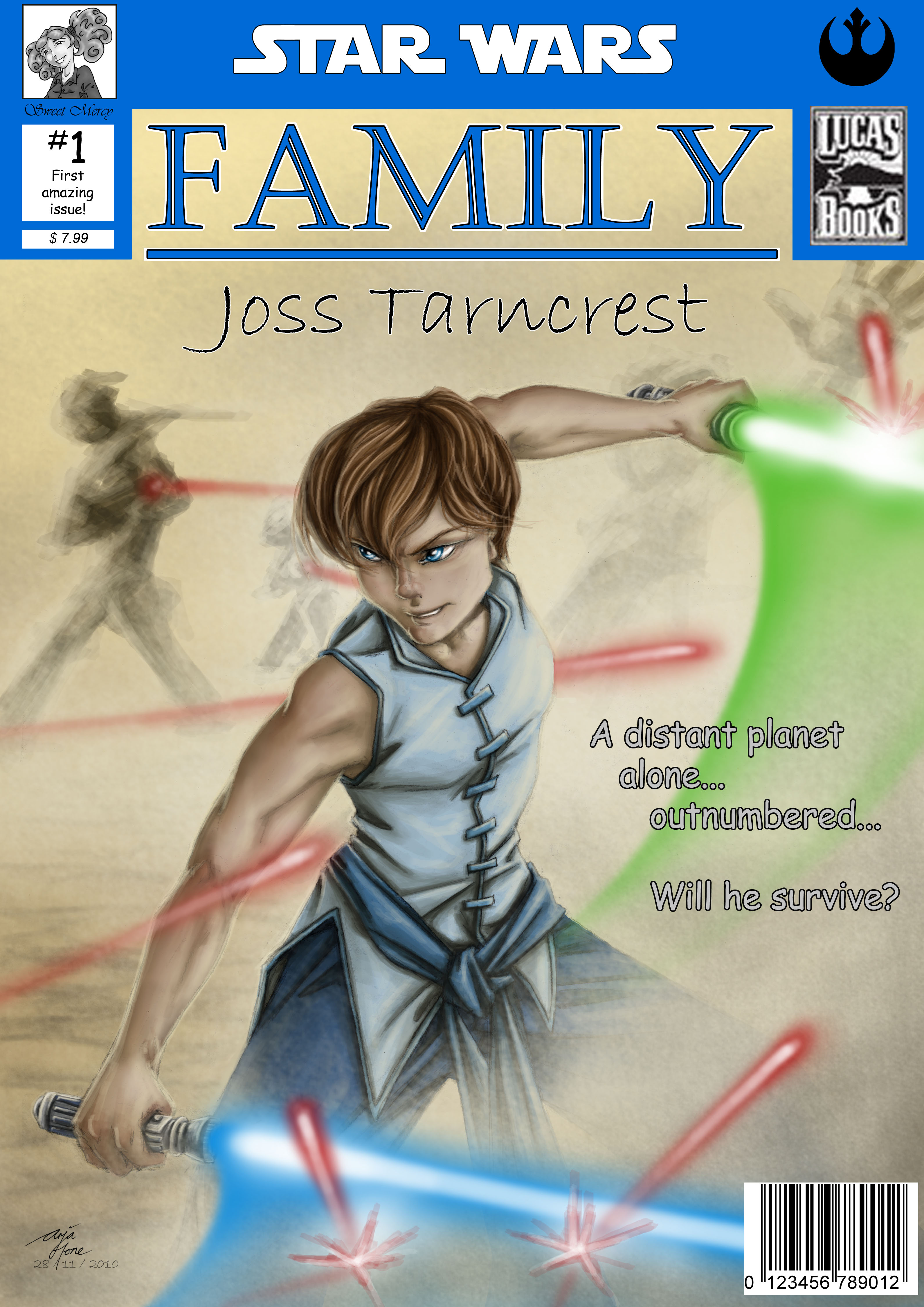 Joss sat hunched over the computer screen. He was reading the latest updates on the latest pirate attacks that had plagued Raioballo sector for the past year. The attacks had him, his dad, and brother searching the whole sector and this resulted in them being gone for long periods of time.

Joss started feeling frustrated at not being able to triangulate where the pirates base of operations was located. He got up and went outside to do another training session. These training sessions served to help him clear his mind and allow the Force to unravel the problem facing him. He activated the sparring droids and remotes while allowing his mind to drift on the currents of the Force.

He deflected blaster bolts fired by the training remotes and parried the sabers of the sparring droids, yet not fully aware of them as his mind was went over the information. He knew that his mother and sister were visiting family on Corellia; dad and Nath were investigating the pirate attack in and around the Anx and Gravlex Med systems. As the information swirled around in head guided by the Force, things began to fall into place.

The realization hit Joss like a punch. Someone wanted to keep the Tarncrest family off Dantooine. As Joss felt the Force flow around and through him it suddenly warned him of the impending danger. Then the ground shook.

Joss came to himself and looked south toward Garang, Dantooine’s capital, and saw smoke rising into the sky. Joss immediately ran toward the garage and jumped on his speeder took off toward the capital. As he neared Garang, five ships rise into the sky, so Joss turned around headed back to the homestead.

Once there he jumped into one starfighters that his dad kept around the hanger and fired up the engines and headed for space to engage the pirates. He tracked them and got a bead on their trajectory as the pirates entered hyperspace. As soon as he had the coordinated Joss programmed the jump while compile a message for his dad and jumped to hyperspace. His destination was Tertiary Kesmere system.

Joss came out of hyperspace above the planet Tertiary Kesmere. A quick scan showed him the energy signatures of the pirate ships and followed it down to the surface. He landed the fighter a couple of kilometers from the pirate base and hiked the rest of the way. He observed the base and made about twenty-eight pirates. The hostages were on the north side of the compound with four pirates guarding them. If he was his brother, he would slip in quietly and deal with the guards and release the hostages before confronting the pirates and his sister would hit them all with the Jedi-mind trick. But that wasn’t his approach. He was a Jedi Guardian and combat was his element. Once he had committed the layout of the compound to memory he noticed that the largest grouping of pirates was around their idea of a mess hall. He formulated a strategy then went into action.

Using Force speed, Joss quickly crossed the compound yard and plunged into the mob of startled pirates. They were so taken by surprise that it took a few seconds for them to react to the young man welding dual lightsaber and felling their fellow pirates. After the initial shock wore off the pirates started firing their blasters at the young Jedi in their midst while some rushed him with vibroblades.

Joss was using the dual version of Form IV of lightsaber combat and using all manner of acrobatic maneuvers against his opponents. He twirled and flipped among them to gain extra protection as the pirates shot in the mass of bodies just hoping to hit him but hitting their own people. His lightsabers were a continuous blur as he disarmed or dismembered the pirates. Then things were still except for the occasional moan of the pirates who had lost limbs to Joss’s blades.

Joss found himself surrounded by six pirates with blaster leveled at him but did not fire. Joss told them to surrender and he would take them into custody and turn them over the authorities. An older man exited one of the huts and walked to the edge of the circle. He asked for Joss’s surrender but Joss in turn asked for the pirate leaders. The leader talked about the mess Joss had made of their operation and the trouble he would have in replacing the pirates with fresh meat. Joss once again told the pirate leader that they were all under arrest or they could face the consequences. The leader gave a laugh and at his signal the six remaining pirated opened fire on Joss with their repeating blasters.

Joss immersed himself fully into the Force and lightsabers blades moved with blinding speed. Would he survive this concentrated firepower? Find out in our exciting next issue.

This is an awesome picture Mercy, I just wish it had more front page time. I already have new ideas about the kids but I'm going to wait a bit and give others a chance at have their pictures done. The blaster deflection is cool and the expression on his face is excellent. It is a serious situation but his having fun while doing it. Thanks again.

Yeah, sucks it got bounced off so fast...
Ah well - let me know when you have another set of requests. You know I love doing ones for the family!!