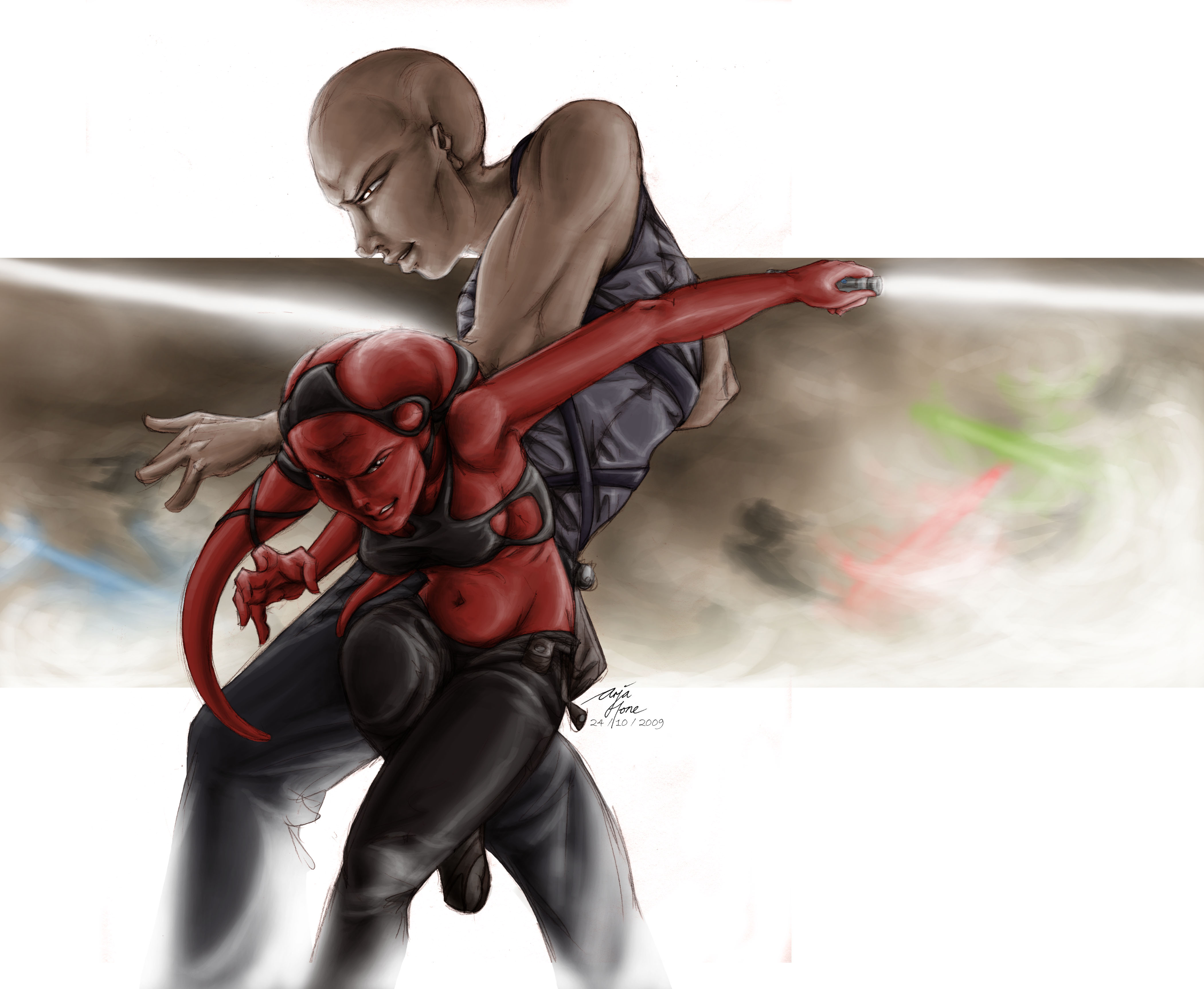 "Xian is a Korun from the gosh Windu. Basically a human sub species from the same tribe as Mace Windu. Xian at a young age joined the Empire. This was of course while the Empire had been returned to Sith rule. Xian did not favor the Sith but liked the order brought about by the the previous Emperor Fel. When agents loyal to the Emperor Fel discovered his true loyalties they transferred him to the famed 501st legion.

As a commando agent working undercover Xian discovered a young Twilek girl named Adira. She was a slave, and a poorly treated one at that. However Xian (who by now had figured out he could feel the force) also sensed her potential. He initially tried to neogoate for her release but her slave master wanted an unfair price. So Xian killed him and took Adira with him.

For the next two to three years the pair traveled together with Adira helping Xian out on his various assignments. When Emperor Fel returned to reclaim Bastion Xian was recalled so that he could show his loyalty among his fellows. Xian of course brought Adira with him to the new capital of the proper Emperor.

It was while on Bastion that both came under the notice of the Imperial Knights who decided to train them to be Knights. Currently with their initial training under way Xian and Adira have been sent off to do undercover work for the Emperor.

Xian Windu is of course dark skinned like his presedosr Mace. If you want to use Mace or Samueal L Jackson as kind an inspirational base then thats cool. Much like Mace though Xian sports a sexy bald head :P. He dresses causally since he's undercover. Simple slacks shirt and boots. And of course a cloak. His favorite color is purple and thus tries to incorpate it into whatever he's wearing. I'm not sure what in the outfit should be purple but I figure you can decide.

Adira Xen is one of the rare lethan Twi`leks. A nice crimson shade of red to be exact. She was trained as a dancer and as such has the body of one and still dresses as an exotic dancer. This is mostly to remaining appealing to Xian. It's not a necessary step, but one he has yet to object to. Therefore outside of the cloak she wears she tends to wear ... very little. Around her neck is a leather collar (not a slave collar, more of a bondage collar). Since Adira got the collar from Xian on the day he told her he loves her Adira's player wants to make sure its in the pic."

Do you ever sleep, Mercy?
How do you manage to crank out such quantity without sacrificing quality? Seriously! It's one amazing pic after another with you.
.....
Did you sell your soul for the ability to rock hardcore?
I sold mine for a hotdog, wrapped in bacon, and deep fried.
Maybe I should have gone with hardcore rockage.....