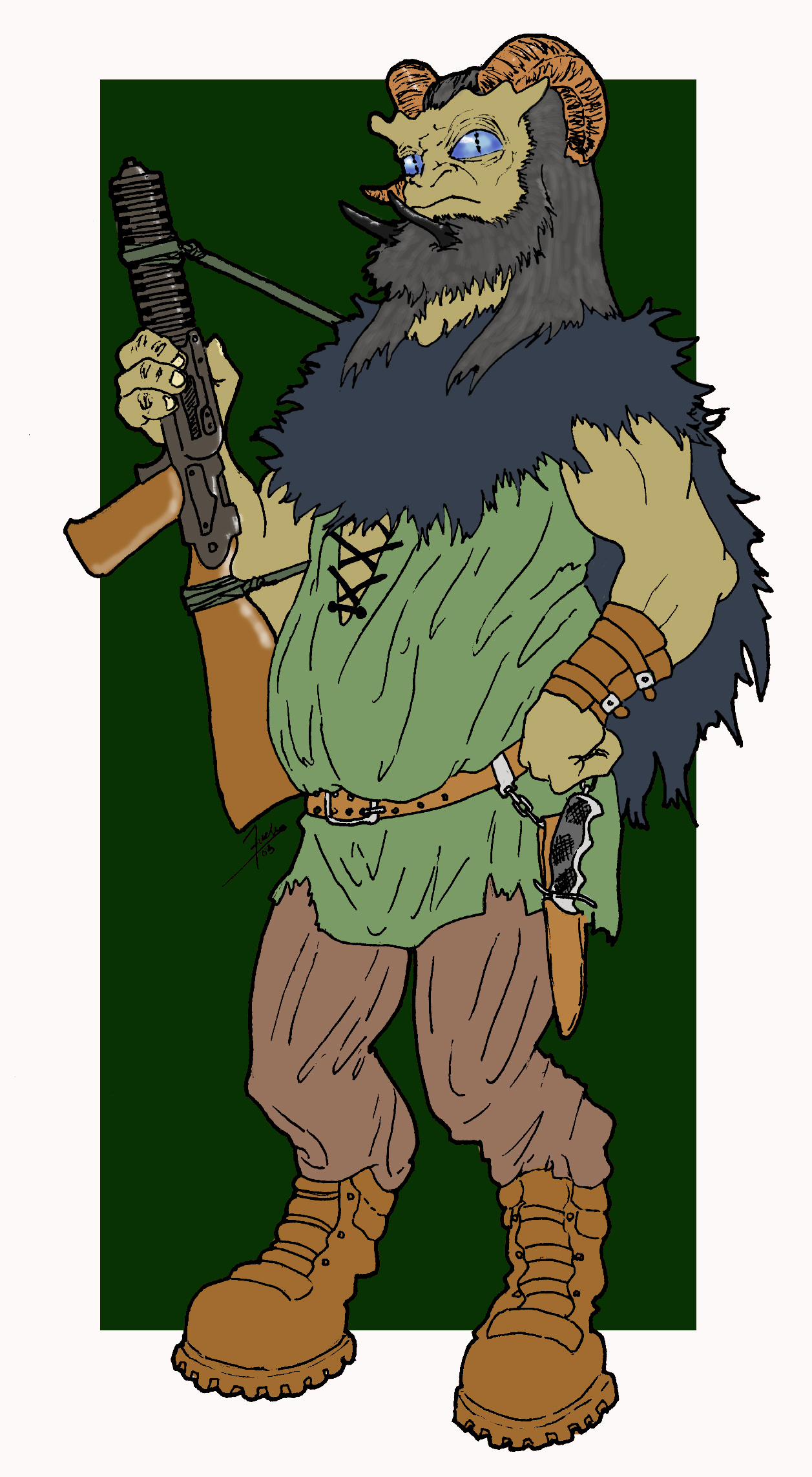 Min Cartha Jukta is the captain of the pirate ship Min's Wind. Once a top fighter ace on Minshasa, he was banished from his homeworld for shadowy reasons. Aside from privateerig work for the Empire and piracy, he is driven to find a member of his former fighter squadron, Min Tan, who has disappeared into the Outer Rim. Species Profile: Min The Min hail from the planet Minshasa in the Covalta System of the Unknown Regions. Though they have a well established society and fairly complex communities, the Min are primarily nomadic, wandering Minshasa’s temperate plains and forests much like the bovine herd animals from which the species evolved. Their villages are caravans of building sizes, tracked, vehicles. The few permanent settlements they have revolve around either the highest levels of their tribe based government, or heavy industry, such as foundries and refineries. The Min remain very much in tune with their environment and keep the industrial settlements to a minimum required to support their society. All males’ names begin with Min. Their middle names are usually family, tribe, or clan names, and their last names are given names. Min in familiar company may be addressed by only the last name. Min who have gained some fame are often referred to using only first and last name. Min may gain such notoriety through technical or social accomplishments, but it is most frequently a result of battlefield prowess. The Min are a fairly aggressive species whose history is one of inter-tribal wars. It is within the current generation that they have become unified under Supreme Chief Min Dolin Sha. The unification resulted from Min Sha’s pure will to bring his people together to defend against aggressions from their stellar neighbors, the Vourren. The Vourren and Min have been engaged in a series of brief wars spanning nearly thirty years. Min do very well with new technology that they have been introduced to. Their own technological evolution, however, is only in its industrial age. Much of their ground based machinery consists of cast iron, rivets and steam or fossil fuel power. They are skilled at tinkering with old equipment and prolonging its life beyond what would seem normally possible. Personality: Min are intelligent, have a high tactical aptitude and form fierce loyalties to those they deem worthy. Some can be quick to anger and most have no problem sorting issues with a fight rather than diplomacy. As a species, they are known to hold a grudge if they feel they’ve been wronged. Physical Description: Min are humanoid, ranging in height from 1.5 to 2.0 meters tall. Their most distinctive features are hooved feet, large eyes, and two pairs of horns; one curling from the tops of their heads, and one protruding forward from their jaws. Homeworld: Minshasa Language: Minshasese. Many who travel the Unknown Regions also speak Sy-Bisti. The few who travel into the Outer and Mid-Rims pick up Basic easily. Example Names: Min Tan, Min Catha Junta, Min Terse Maggot, Min Dolin Sha. Adventurers: Min who have left the Covalta system have likely been banished for some reason, leaving them resentful and vengeful. They may tend toward piracy or mercenary activities. Some show unusual skill as pilots. Min Species Traits Min share the following species traits: Ability Modifiers: +2 Constitution, -2 Dexterity, -2 Wisdom Medium Size: As Medium creatures, Min have no special bonuses or penalties due to their size. Speed: Min base speed is 6 squares. Iron Will: Min have above-average willpower and gain a +2 species bonus to their Will Defense. Heightened Awareness: A Min may choose to reroll any Perception check, but the result of the reroll must be accepted even if it’s worse. Automatic languages: Basic, Sy-Bisti, Minshasese (For Min outside the Unknown Regions)

i am super drawn to this characters face... loves it