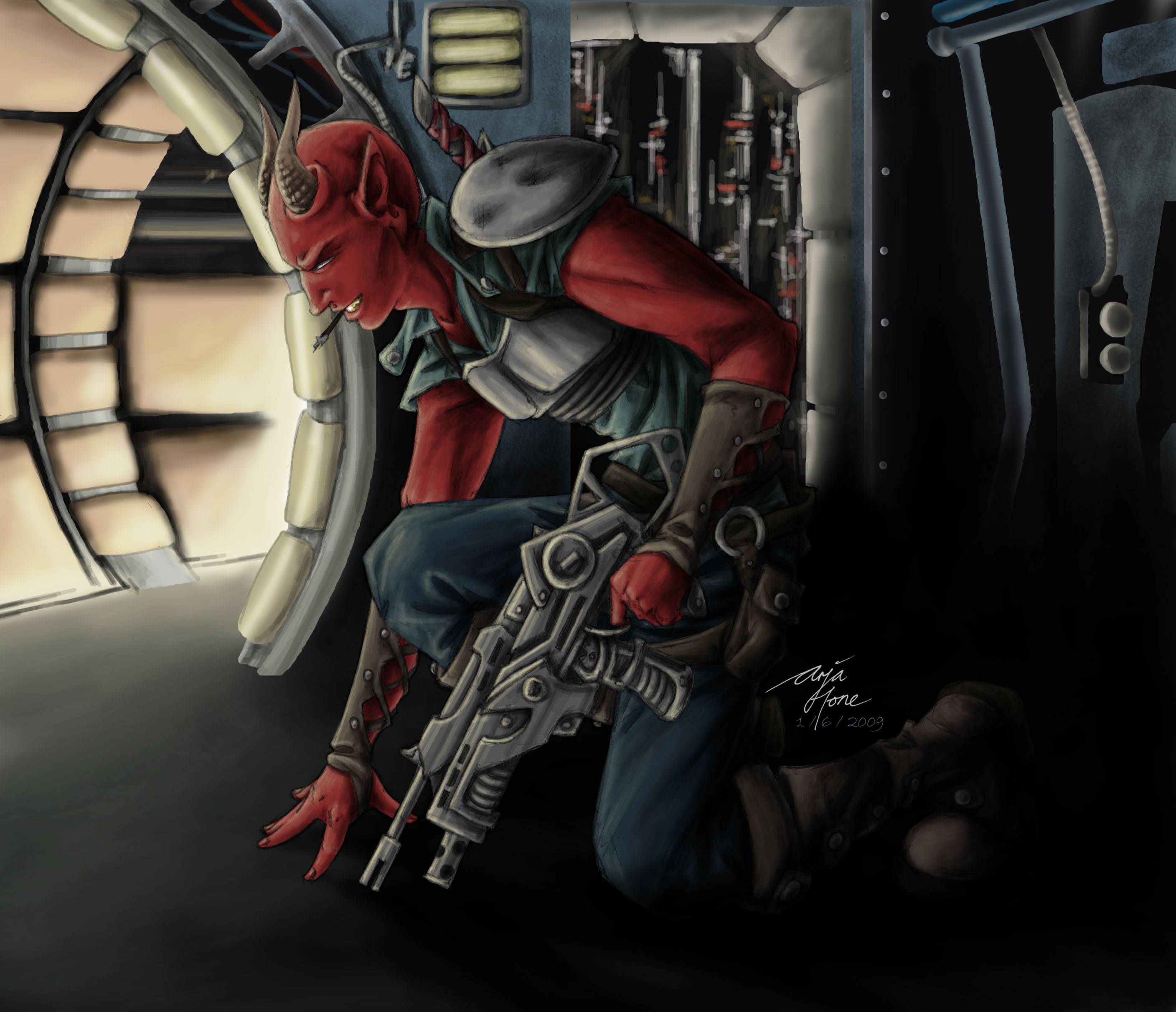 A personal request for a character pic for Sulkon88.
This is a brief excerpt from his Character WIKI.

Dalmarhk has red skin and light tan horns characteristic to his Devaronian lineage. He regularly wears black and silver tinted medium armor with a variety of bandoliers and ammo belts that store explosives and provisions for any scenario. Strapped on the small of his back is a Echani short sword Ajrick was given by his mentor Laron Heniso. Besides the blade Ajrick is usualy seen carrying one heavy blaster of Mandalorian make. He is often seen smoking Corellian cigars."

"Courage is pointless, in the face of my blaster bolts." -Ajrick Dalmarhk, just before he gunned down the notorious bounty hunter G'Natle Viance.

Well, if it's not obvious to you by now, Mercy, your tech work has grown leaps and bounds (as well as your other work, but this has grown significantly). The other stuff is good too :-D Just wanted to mention.

Thanks very much for taking the time and energy to put this all together. Really is cool to see a character brought to life in this fashion and I'm working right now to put it up for the wiki page with personal acknowledgements to your work. Thanks again. As you said in the comments portion on this it does appear word is getting round about your work and I wish you the best.

Yeah, I've been working hard at getting my tech up to scratch, since I think it was my least strong-point - thanks for noticing, Eclipse!!

Sulkon, I'm so glad you like the picture! As I say, I really enjoyed doing this one.
Heh, I do seem to be doing more pieces for the Wikia fraternity!

I love the background. you do beutiful things to a character.

I agree with Eclipse, the tech work is awesome. I'm going to venture to say this is the best one yet!

Aw, you guys are lovely!!

"YES! The tech of the ship is awesome." The bounty hunter is kewl also with the cigar between his teeth. The colors are just amazing in bringing it to the forefront.

You are in full form these times? Did you eat of Nexu?
Each drawing appears to me more succeeded than the precedent! What a excellent technical progression! I am fan of the shades, of the folds of clothing and the accessories which emphasize the character. Without speaking about this very successful decoration.