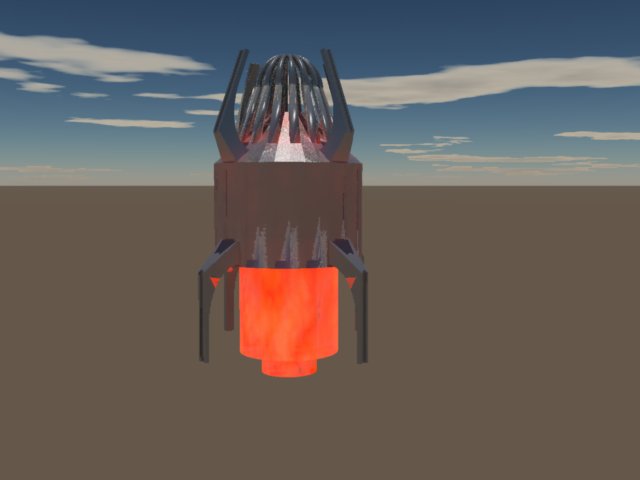 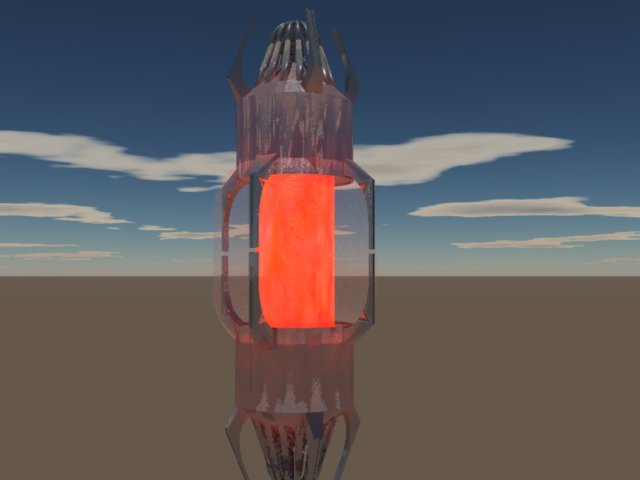 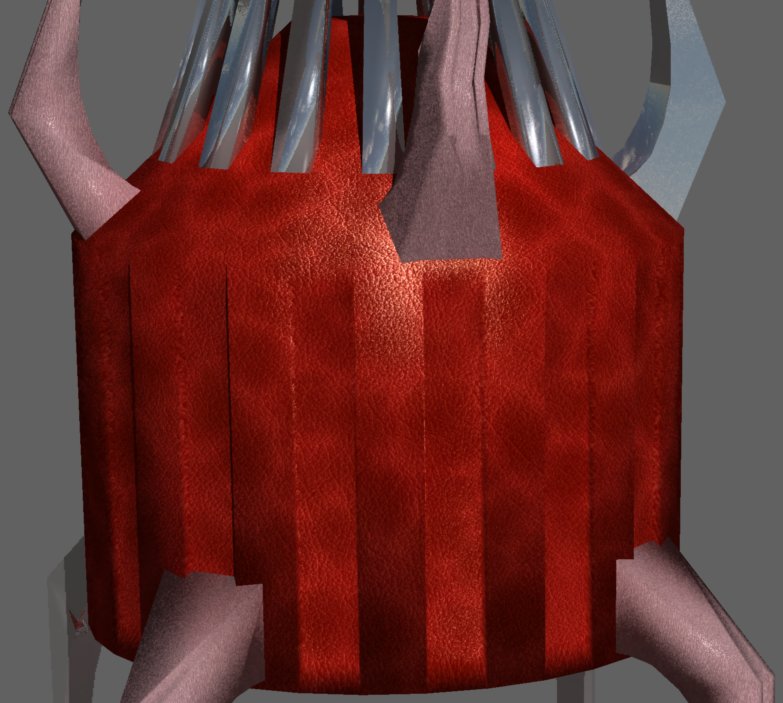 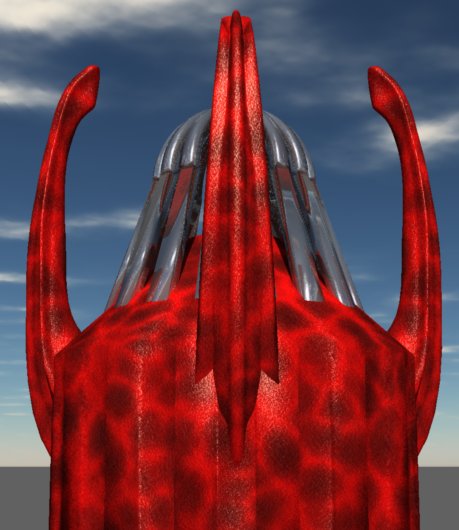 As requested by Jace Terrik, the first of 3 D.S artifacts being modeled in 3D.

While I've been rendering for a few years now, this is a pretty new venture, into actual modeling.

Part 1a:
The initial cylindrical shape.
- A inner cylinder for the glowing "fire" like energy with my own custom made procedural material effect.
- A cylinder with vertical indentation for a container cap
- some sort of end spars that perhaps help channel the energy when used.
- and some sort of domed cap in which the energy can be released from.

Part 1b:
I mirrored the top half to make a bottom half. Then I also added an elongated capsule to perhaps be like a barrier or maglock type energy containment shield. I have yet to connect the re-inforcement spars around the containment shield.

I might add more color to the entire various parts.

No actual modeling updates at the current moment... I'm rather now waiting on Jace Terrik's feedback before I continue onwards.

If this design current design is acceptable, only then I'll proceed ahead, polish it up a bit, and start the next of design, as there's a request for a total of 3 individual artifacts. I won't spend another 7 hrs to only hear that the design's all wrong or should be different (and likely require deleting and re-modeling portions of the 3d mesh from scratch).

Jace: what I need from you-
- Your feedback, thoughts, and opinions. Do you like this design sofar or what?

- Coloration - right now its a semi-shiny metal for the main housing (yeah there's a reddish glow effect happening also). I can add some extra metalic colors to it, on certain parts of the model (Just don't expect fancy engraving as that requires UV-Mapping the model, which is intermediate to skilled modeling level. I'm still at beginner stage right now.)

- How big/small do you want these to be scaled to? Palm size? arm's length?

Anyone else wanting to toss a few opinions or comments, feel free to ;)

Having chatted back and forth via P.M with Jace, some ideas and suggestions were brought about.

- Devices should be more organic in design and appearance, including surface textures instead of hand made and metalic.
I hadn't done much to alter the initial cylindrical shape yet. I did however, "smoothed" all the hard edges, which has an interesting effect, gives the item more defined definition.

- for fire projection relics, should be possibly red in color
A leather like surface texture has been swapped in place of the metal for the cylinder body, tinted red, with the addition of darker blotchy patches. Like an alien reptile skin.

Also, tried a similar style on some of the arms, a lighter shade of red, although the texture is too fine to really show up. Will work on it, or could try some other type of material.

- Suggestion of twisting of end-claws
I tried 2 different things.
1. Smoothing of hard edges. This is apparent on all 4 light red "claws" . When comparing them to the previous versions, you'll possibly see the slight difference it makes.

2. The top right claw, I had to tesselate to center a few times to increase the number of polygons, which i then twisted in sections slightly, a partial turn each. Personally I'm not too convinced of it looking more organic. Just bent out of shape.

I might have to go back to the drawing board and model new claws, something that looks more tendril like.

I tried a new / different approach to making some new end cap spars and mid-center spars... Hopefully they look more organic than machine.

Also adjusted the texture, so its more red with black mottling.

You may want to shoot him a PM on the site... The PM's are linked to emails most of the time, and thus will give him a heads up... Just a thought :)

First off, thank you Xanamiar/Eclipse/the friendly person hosting this site, for being a big help. I really appreciate you taking the time to help a captcha-blind person out. :) There will be songs about you, and your kindness, one day...

First off, excellent work, TNJadeonar! :) I really like the fact that it looks like a device; you can hold it in your hand, like a tool. I also like the whole "clamp-with-a-light-in-the-middle"-thingy. Definetly keep that. :) Also, it has sharp edges and a kind of lightsaber-feel to it. The devices *are* powered by somekind of Force-energy, so that's a fine detail. Keep that, too.

Also, you asked for sizes? Well, they should be roughly 15 to 30 centimeters in length; an average humanoid could hold one in his hand without much problems.

Now, if I may, here are some ideas/questions/other craziness:

- Plular: Are you going to make more than one artifact, as I requested? I just want to make sure; I'm happy over the fact that someone took my request, but the more you could make, the more awesome it would be. I, however, don't want to push you to do anything you don't want to/have time to do. On the other hand, I'm in no hurry, so you can take your time with this... just keep me updated with a smiley or something, once in a while, so I know we're still going forward with this. :)

- Organic feel. Zahn described the technology as semi- to fully organic, so I'd like to see some green tones, or greenish-yellow... like your stuff with the Alien/Wookiee-hybrid (See my note about color on the following post, though.) Throw in some strange textures, too; to make it really alien, really wierd!

- Different shapes, different colors = different purposes. The different DarkStryder modules had different shapes and colors and these signified what they were used for; the tubular objects with reddish color projected fire, etc. A blue, flat disk may be an energy shield of some sort... you get the idea?

That's about it. As I said in an earlier message, other than the guidelines about the thingys, feel free to exercise your imagination. I'm loving the stuff so far, love it!

Would it be awkward to send you an e-hug? :)
Best wishes,
Jace

P.S
Here's a link to Wookiepedia's article about the DarkStryder artifacts. Just for inspiration.
http://starwars.wikia.com/wiki/DarkStryder_technology

P.P.S (IMPORTANT!)
Depending on how you work, I can, also - if you want - give you specific shapes and colors and what to do. I can do that; just give me a limit on how many objects you can do, and I'll write a detailed description about them. I was just assuming that you wanted some room for creative brainstorming instead of just hammering out what I want. :P

Alrighty, we'll get down to business !

since we already exchanged a few P.m's , and now at least your able to post in the wip blog, i'll give the design a couple more style ideas and textures.

Yes! I'm loving the red texture! :) Can you make it a few shades darker, though, or maybe just make the contrast between the lighter and darker spots bigger? Vorlon-style, you know? :)

Yup, link works now, and got your P.M.

Now, here's a little interesting history factoid, considering the organic 3d rendering involved here - Babylon 5's 3d elements were made and rendered on Amiga computers, with the RayDream 3d software, back in the early 90's .

RayDream throughout the 20 years, evolved into what is now Carrara, which is what I use for all my 3d rendering.

Yes, I'll try increase the contrast between the spots and color.

I think i'll re-work the claws tho...

Heh. So, just my random comment to assure you that I'm still here. Hope things are going well. As far as making the tendrils look more like tendrils... have you thought about maybe either sharpening the tips - like claws - or rounding them out - Vorlon-style - to get that organic vibe?

Nice! The spikes look great! I like the bulge that runs in the middle of every spike. :) Can you twist 'em a little? Make the way they're sticking out less symmetrical?

Love the mottled skin, too. Though feel free to step it down to a darker shade. Think arterial blood. May give it a more organic vibe. Though that's just an idea. Might not work. So I leave that to you.

I really like the texture, the pointy claws and the subtle reddish light from the eyes. Maybe something for the other artefacts?

Happy Thanksgiving, by the way!

The twisting of the claws doesn't always work that well, will give it a try with the new ones. There's only so far a mesh can be stretched and twisted and still look good, then to a point it becomes obvious that its overstressed.

Darken the texture, I can do that, deeper red, and perhaps larger black patches so it has a more arterial vein look to it - perhaps on the mid-section braces especially.

quick note: I'm keeping the central cylinders hidden for now. Those textures and effects alone add a few hours to the test render time (opposed to a ballpark 15 minutes to do a decent sized test render)

The shadow link, certainly could be useful for inspiring some design details for the next item.

Roger that! Keep up the good work.

Just wanted to let you know that I'll be out of touch for most of the rest of the month. Christmas and New Year's and all that.

See you on the flipside!

Still here, still around, just been uber busy these past few months... we'll get it done... eventually...

Is this request still a work in progress, or has it been abandoned?