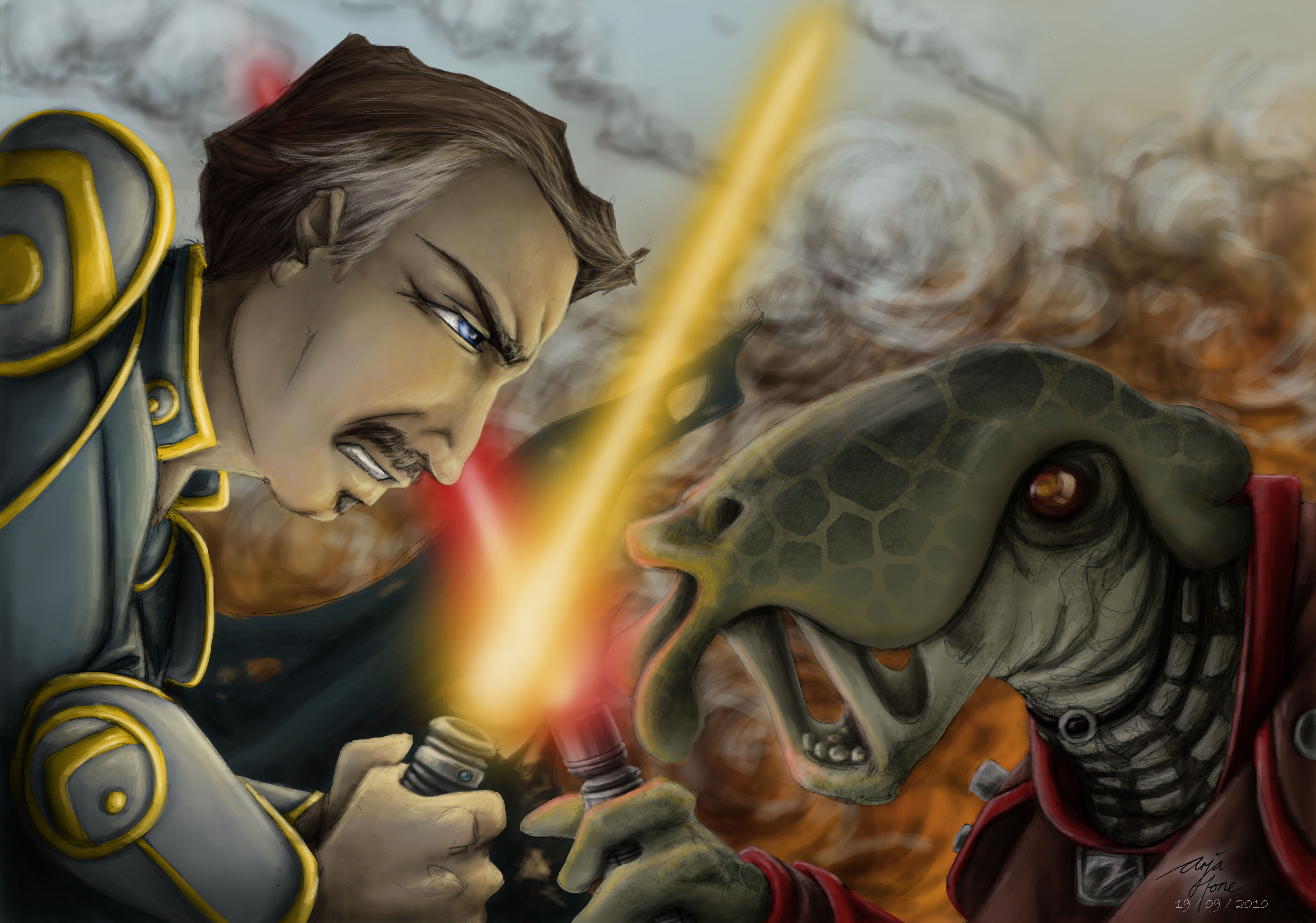 CHAOS! Utter chaos. That is what is. The battlefield was choked with thick black smoke and the smell of ozone hung heavy in the air along with the stench of death from the bodies that belonged to Lord Hoth’s Army of Light and Lord Kaan’s Army of Darkness strewed across the landscape. It is this chaos where Crumb Tarncrest, Jedi Lord and Master, finds himself.

The shear noise from the battle became a white sound roar. It was impossible to hear individual sounds. Crumb deflected blaster bolts and cut down “Sith Lords” left and right as they rushed him hoping to take down a Jedi Master. In the midst of the battle Crumb searched for his Padawan when a howl in the Force spun him around just in time to see a female Selkath Sith Lord strike down his Padawan with a savage slash across his chest with her blood red lightsaber. Crumb shivered and he felt a rage build within him but he took a deep breath and allowed the Force to flow through him and carry away his angry, grief, and thirst for revenge because he Padawan was now one with the Force. Crumb raised his lightsaber then charged the Selkath Sith Lord.

Sharshea was having the time of her life. Since arriving from Korriban Academy She took every opportunity to cut loose with her Force Scream that blasted whole swaths of Jedi and Republic soldiers over the battlefield. The Jedi were finally on the run and easy pickings for the Army of Darkness after the previous battles they had fought. Sharshea wanted it to last so she could drink up the fear that her opponents felt.

As she cut down another Republic soldier Sharshea ducked suddenly as a blue lightsaber cut the air where her head had just been. The Force had warned her in time as she turned to her new opponent, a Rodian Jedi, and a Padawan at that. The Rodian came in high as she blocked it and countered with her own. The two fought for about a minute. Although the Padawan had potential his power was nowhere near hers. After deflecting his lightsaber to the side then delivering a well place kick to his center torso that knocked him back several meters she drew on the Force and bellowed a fierce Force Scream that shattered the Rodian Jedi. As she looked upon the body of the fallen Jedi Sharshea sensed a disturbance in the Force that centered on the Padawan. She followed the sensation and looking to her left she saw a Human Jedi that must be the Padawan’s master. The Force revealed that the Human was feeling the pain of loss of his Padawan but quickly pushed it away. The pitiful Human wasted the opportunity to draw on the Dark Side and fuel his rage for revenge. The Jedi were so weak and stupid. The Jedi Master centered himself and charged at her with his lightsaber at the ready. She did the same.

Their lightsabers clashed but no sound was heard due to the battle that surrounded them. Jedi Lord Crumb Tarncrest parried the Selkath’s first and second attacks then countered with his own. She was good but still a novice at the art of lightsaber combat.

Sharshea was getting frustrated none of her strikes had made contact with the Jedi and quickly had to parry his attack. She redoubled her efforts to strike down this Jedi but he was countering her attacks with elements of Form III. They danced around the battlefield, stepping over bodies and unidentifiable masses that littered the ground.

Lord Crumb could feel the Selkath’s growing annoyance at not being able to pierce his defenses. Sharshea continued to attack the Jedi Lord but he was putting up a good fight but it was seriously hacking her off. She decided it was time to put distance between them. She leaped several meters back from the Jedi and began a build for a Force Scream. Recognizing what the Selkath was doing Crumb used the Force to increase his speed and rushed her. He narrowly avoided the Force Scream as he brought his lightsaber up to bi-sect the Sith. A warning in the Force cause Sharshea to cut her Force Scream short and dive then roll forward to avoid being cut in half.

As she came up in a ready stance her fury got the best of her. This Jedi should be dead already but he evidently did not get the message. She gave into her rage and lost all control then rushed the Human Jedi. Hacking and slashing with her lightsaber she was feral now and her rage went unfocused and wasted. Crumb blocked, redirected, and parried her blows one after the other. She was wild and dangerous now but more to herself than she realized. Crumb gave ground as if she were gaining the upper hand and presented her with false hope of victory. When one of her swings went wide Crumb rolled past her delivered a cut to her legs. Sharshea bellowed in pain and a rage she could no longer control. She lunged at him and he stood his ground as sabers swung at each other. Then Sharshea’s senses went haywire. Something was wrong. Seriously wrong. Her blade had missed the Jedi’s blade. Sharshea looked down to see the Jedi kneeling before her. His lightsaber plunged deep into her chest. She blinked once, twice, and then darkness.

Crumb readied himself as the Selkath Sith roared with rage and charged him. He closed his eyes and allowing himself to fall more deeply into the Force, allowing it total control over his being. When he opened his eyes, he was in a kneeling position with his lightsaber thrust forward into the chest of his opponent. He watched her blink a couple of times then he deactivated his lightsaber and she fell to the ground. Jedi Lord Crumb Tarncrest dwelled on the encounter for just a moment when he noticed that the Army of Darkness was in retreat. Jedi reinforcements had arrived to turn the tide of the campaign. With the battle winding down, Crumb Tarncrest, Jedi Lord and Master, allowed the Force flow through him and with that a vision of the future. With a humble smile Crumb head for the Army of Lights headquarters. The campaign for Ruusan was not over. Not yet, but close.

I am psyched. Thanks for doing the request of Lord Crumb battling the Sith Selkath Sharshea.
The intense looks on the faces and the colors are great.

But I love this piece, and the accompanying story... sigh, I'm such a sucker for the drama. The emotions you've got going on are fantastic, and I love your attention to detail!

(And just so you know, I think my cat's a fan of this piece too. He keeps trying to add things to what I'm saying... typing is difficult with a cat face smooshing your fingers.)

Thanks for your kind words, Tusserk - and glad you like the piece!